Hosts New Zealand have hammered minnows Zimbabwe by a massive margin of 141 runs in the Second ODI at the Cobham Oval in Whangarei. The Kiwis with this have sealed the 3-ODI Series 2-0. The star of the match was 28-year-old Rob Nicol, who opened the batting to smash a career best of 146 from 134 balls with 10 fours and 6 sixes. 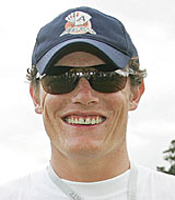 New Zealand then restricted Zimbabwe to 231 for 8 in 50 overs to win the series with one more match to go. A couple of players got going for Zimbabwe in Wicket Keeper Tatenda Taibu (50 from 76 balls with 1 four) and Elton Chigumbura, who scored 63 from 69 balls with 7 fours and a six coming in at no. 7. Oram followed up his quick-fire half century with mean bowling figures of 3 for 29 in 10 overs. Rob Nicol got the Man of the Match award. The Black Caps today gave ODI Debut to 28-year-old leg spinner of India origin - Tarun Nethula who had a bad first game going for 55 in his 10 wicketless overs.