New Zealand opener Martin Guptill has said that weather and the consequent results of the other team won’t have an impact of their game when they take on England on Tuesday.

New Zealand opener Martin Guptill has said that weather and the consequent results of the other team won’t have an impact of their game when they take on England on Tuesday.

"We can't let that dictate the way we play - we still have to go out and do our thing, be aggressive and take it to the opposition," he told the media.

"If we take a step back, we've already lost the game before stepping out there,” Guptill added. 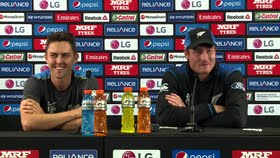 "They're both obviously world class players - they can both be destructive without hitting those massively big shots," he said.

"They kill teams softly. They're not going to go out and blast at a 160 strike rate through the innings.

"Their batsmanship is ridiculously unbelievable, they know the game inside out and it's a master class when they get going,” he added.

Guptill said his role as an opener was to provide stability to the innings. "I play the same way whoever I'm batting with. Whether it be one-day or Twenty20, I look to go out and create a strike rate at the top of the innings for the rest of the guys to be able to come out and play their games,” he concluded.