India beat New Zealand in four days, and by an impressive margin of 178 runs, to clinch the three-match series 2-0 at Eden Gardens in Kolkata. Here are some interesting numbers related to the match

India beat New Zealand in four days, and by an impressive margin of 178 runs, to clinch the three-match series 2-0 at Eden Gardens in Kolkata. Here are some interesting numbers related to the match.

Including the Eden Gardens triumph, India now have won 11 of their last 12 Tests at home. This is their best run at home in a series of 12 Tests. Had it not been for the one washed out match against South Africa, their record could well have been 12 out of 12. 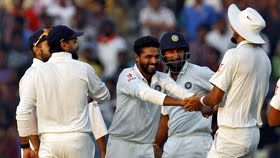 For the second Test in a row, not a single batsman from either side managed a hundred. While there were ten fifties in the first Test without a ton, there were six at Eden Gardens. Cheteshwar Pujara was the top scorer in the Test with 87 runs followed by Rohit Sharma, who made 82.

Wriddhiman Saha not only scored a fifty in each innings, but also remained unbeaten only both occasions. Saha became the fourth Indian wicket-keeper to have made two fifty plus scores in a Test. MS Dhoni, Farokh Engineer and Dilawar Hussain are the other three to have done so before. Among them, Dhoni has achieved the feat as many as four times.

New Zealand had only one half-centurion in the match, across two innings. Tom Latham top-scored on day four with 74. In the first innings, Jeetan Patel came closest with 47.

Since his maiden 200 in the first Test at North Sound in West Indies, Indian skipper Virat Kohli’s form has declined steadily. He has not reached fifty even once since. The closest he came to doing so was when he made 45 in the second innings at Eden Gardens.

This was an unusually successful match as far as pacers from both sides were concerned. A total of 26 wickets fell to faster men. New Zealand’s pace bowlers claimed 14 and India’s 12. Ravichandran Ashwin and Ravindra Jadeja finished with a combined tally of eight wickets, which is quite low for them in Indian conditions.

After failing in the Tests in West Indies, Cheteshwar Pujara has roared back to form with three consecutive fifties in the series. He followed up his 62 and 78 with 87 in the first innings at Eden Gardens, before he tasted his first failure of the series in India’s second innings.

Shikhar Dhawan’s fortunes have not been shining as brightly. Since his 84 at North Sound, he has failed to reach 30 in five Test innings. His highest being 27 at Kingston. With injury ruling him out of the third Test, his woes have only worsened.

Dhawan though has company in the ‘struggling club’ in the form of a couple of prominent Kiwi batsmen. To say that Martin Guptill and Ross Taylor are in desperate need of runs would be an understatement. Guptill’s scores in the series read 21, 0, 13 and 24. Taylor, on the other hand, has scored 0, 17, 36 and 4.