The Perfect Start: Batsmen who scored hundreds on ODI debut

Indian batsman Lokesh Rahul created history on a lazy Saturday, becoming the first Indian to hit a century on his one day debut. Rahul hit and six and finished up on exactly 100 from 115 balls as India beat Zimbabwe by nine wickets in the first ODI

Indian batsman Lokesh Rahul created history on a lazy Saturday, becoming the first Indian to hit a century on his one day debut. Rahul hit and six and finished up on exactly 100 from 115 balls as India beat Zimbabwe by nine wickets in the first ODI at Harare. Rahul hit seven fours and a six, making him the 11th one-day batsman to achieve the feat in his debut match. We take a look at the 10 others who got there before him.

Dennis Amiss: The England cricketer was the first international batsman to achieve the rare feat. Amiss scored 103 from 134 balls against Australia at Manchester on August 24, 1972. Amiss hit 9 fours during his stay at the crease. England went on to win the match by six wickets, chasing a competitive total. Incredibly, this was the only the second ODI international ever played.

Desmond Haynes: One-day cricket had to wait nearly six years to get their second batsman who scores a century on debut. It was none other than the legendary Haynes, who hit 148 from 136 balls for West Indies against Australia at St. John's on February 22, 1978. Haynes hit 16 fours and 2 sixes in a knock that was a fast one by those days' standards. Having posted 300 plus on the board, West Indies eased to a 44-run win.

Andy Flower: No batsman was successful in hitting an ODI hundred on debut in the 1980s. The jinx was broken in the 1990s, when Flower hit an unbeaten 115 for Zimbabwe against Sri Lanka at New Plymouth on February 23, 1992. Flower hit eight fours and a six in his 152-ball knock. The Lankans were strong enough to chase 313 though.

Saleem Elahi: The talented Pakistani, who failed to live up to his promise, showed more than glimpses of brilliance in his very first ODI. Elahi made an unbeaten 102 from 133 balls, with 7 fours and a six against Sri Lanka at Gujranwala on September 29, 1995. Thanks to Elahi's brilliance, Pakistan tasted an emphatic 9-wicket victory.

Martin Guptill: After a 14-year gap, the New Zealand opener became the fifth batsman to hit a debut hundred. He smashed an unbeaten 122 from 135 balls with 8 fours and 2 sixes against West Indies at Auckland on January 10, 2009. The match was rained out though.

Phil Hughes: The late Australian is also among the select band of cricketers with a ton on debut. He made 112 from 129 balls with 14 fours against Sri Lanka at Melbourne on January 11, 2013. Australia won the match by a massive margin on 107 balls, and was man of the match. 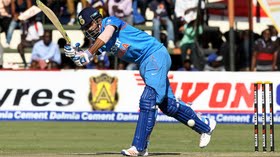 Michael Lumb: The England batsman who was recently in another record-breaking stand, made 106 from 117 balls with 7 fours and 2 sixes against West Indies at North Stand on February 28, 2014. Despite Lumb's efforts, England could not chase 270.

Mark Chapman: The little-known Hong Kong batsman blasted 124 not out from 116 balls with 11 fours and 2 sixes against UAE at Dubai on November 16, 2015. Thanks to Chapman's efforts, Hong Kong beat UAE by 89 runs.