Bowlers set up easy win for RCB over Rajasthan Royals

Earlier, the Rajasthan Royals simply lacked the batting firepower to propel them to a par total. Shane Watson, their most destructive player fell early and an in-form Rahane got out cheaply for once. Stuart Binny at no.4 was promising with a few big hits but got out after a 20-ball 33. Skipper Rahul Dravid scored 35 from 31 balls. After the set batsmen for the Royals departed, there was hardly any quality batting left to provide the finishing touches and RCB was clinical to keep them down to a below par total of 117. 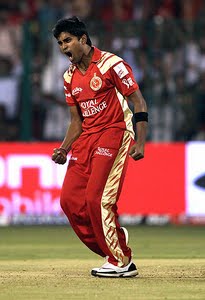 Toss and Teams: Hosts Royal Challengers Bangalore have won the toss and asked Rajasthan Royals to bat first at the M Chinnaswamy Stadium. Dilshan comes back in the RCB team in the place of McDonald and for the Rajasthan Royals, Sreesanth who missed out in the previous game at Jaipur comes back along with the fiery Shaun Tait.