It was déjà vu all over again as Chris Gayle smashed a 100 in 47 balls to take West Indies to an easy win over England in the Group 1 Super 10 match at the Wankhede Stadium at Mumbai on Wednesday. West Indies were chasing a challenging target of 183, built around good batting contributions all round. But, Gayle, like he often does when it is his day, made it look like a walk in the park, blasting five fours and as many as 11 sixes in yet another memorable knock. He got decent support from Marlon Samuels, who chipped in with 37 from 21 as West Indies won by 11 balls and six wickets.

West Indies got off to the worst possible start, as Johnson Charles fell for a duck to David Willey, second ball of the chase. But, Gayle found an able ally in the experienced Samuels, who was desperate for some runs. Gayle got into action by off driving Reece Topley for a four, and then smashing him over his head for a maximum, in the second over. Samuels then tickled one to fine leg, and then square drove Willey for consecutive boundaries. He ripped apart Ben Stokes as well, crunching him for three fours in the fifth over. 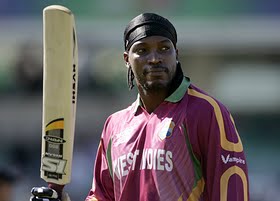 Samuels eventually fell for 37, giving a catch in the deep in Adil Rashid’s first over. The Gayle show was just about to begin though. In the leggie’s next over, he blasted the bowler for huge sixes over long on off consecutive balls, one going into the second tier. When Eoin Morgan brought Stokes back, Gayle launched him for two back-to-back sixes over deep square leg. Denesh Ramdin and Dwayne Bravo came and went, but Gayle carried on in his merry ways.

The 14th over, bowled by Moeen Ali, went for 22 runs as Gayle this time launched three consecutive sixes – down the ground, and towards the long on region. At the end of that over, West Indies needed merely 37 from 36 balls. There was so much time on hand that Andre Russell played without any hurry, and finished unbeaten on a run-a-ball 16. The maverick opener though was in full speed mode. He took on Willey in the 16th over, and launched him for two sixes over deep square leg. In an anti-climax of sorts, Gayle’s 100 came with a squeezed single off Stokes.

What Gayle did put on the backburner everything that transpired before, England did not bat badly, amassing 182 for 6 in their 20 overs. Joe Root eased his way to 48 from 36 balls, Jos Buttler made 30 from 20 while Eoin Morgan smashed an unbeaten 27 from 14 balls. Even Stokes came in and hit 18 from 7. West Indies’ bowlers had a tough time, with Jerome Taylor and Bravo conceding in excess of 10 runs an over. But, England’s bowlers were in for a sterner examination courtesy that man Chris Gayle.