Aaron Finch slammed a world record 156 as Australia defeated England in the 1st T20I at the Rose Bowl in Southampton on Thursday. England went down fighting by 39 runs in a high scoring contest.

Aaron Finch slammed a world record 156 as Australia defeated England in the 1st T20I at the Rose Bowl on Thursday. England went down fighting by 39 runs in a high scoring contest at Southampton.

Asked to bat first, Australia piled up 248 for 6 in 20 overs, which is the second highest total in this format of the game at the international level. Sri Lanka holds the record for the highest T20I total of 260 although it came against minnows Kenya. 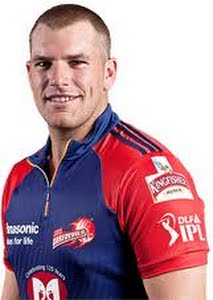 The Australian batting was all about one 26-year-old man from Victoria – Aaron Finch. The opening batsman batted out for 17.2 overs to smash 156 from 63 balls with 11 fours and as many as 14 sixes! Finch easily went past the previous highest individual score of 123 from Kiwi star Brendon McCullum.The 26-year-old is now the only Australian to score a T20I hundred. He fell short by two balls to equal South African batsman Richard Levi’s record of the fastest T20I hundred which came in 45 balls. Finch took 18 balls to race away from a fifty to three figures. The Victorian had a 2nd wicket stand of 114 with Shaun Marsh (28 from 21 balls) and then a 3rd wicket stand of 101 with Shane Watson (37 from 16 balls with 4 fours and 2 sixes).

Most of the England bowlers were plundered for runs except for Jade Dernbach who took 3 for 34. Left-arm spinner Danny Briggs was at the receiving end as he was taken for 51 runs in his 4 overs. Steven Finn and Stuart Broad were taken to the cleaners as well. The worst to suffer was Joe Root who conceded 27 runs in his only over.

England were quickly out of the contest in their run chase slipping to 42 for 4 inside 5 overs. The hosts were rescued from further embarrassment by the pair of Joe Root and Ravi Bopara. Root scored an impressive 90 not out from just 49 balls with 13 fours and a six. Bopara scored 45 from 29 balls while the big hitting Jos Buttler came up with a cameo of 27 from 17 balls. England ended up with more than a respectable total of 209 for 6.

For the Aussies, pacers Mitchell Johnson and Josh Hazlewood picked up two wickets each although they went for plenty of runs. Leg-spinner Fawad Ahmed who made his Australia debut had a bad day going for 43 runs in 4 wicketless overs.