RCB Vs KKR: Chris Gayle made all the difference again

It was an all too familiar sight at the Chinnaswamy Stadium in Bangalore on Thursday as Chris Gayle went about pummeling another opponent into submission. Yet, one couldn’t but be amazed at another demolition act by the so-called IPL specialist...

It was an all too familiar sight at the Chinnaswamy Stadium in Bangalore on Thursday as Chris Gayle went about pummeling another opponent into submission. Yet, one couldn’t but be amazed at another demolition act by the so-called IPL specialist. Although there has never been any doubt about his massive hitting ability, it is still nothing short of unbelievable how the tall West Indian manages to come up with similar crushing innings game after game. Such has been his consistency in the IPL over the last three seasons, it came as a literal shock when he was dismissed cheaply in the last match.

What Gayle’s sensational knock did was make a challenging total set by Kolkata Knight Riders look rather pedestrian. Like in the first game, Gayle took his time to settle in, but once he got his eyes set, there was no stopping the Gayle storm. This feature of Gayle’s batting, wherein he’s content milking the bowling at the start, only to make up for it with monstrous hits in the latter half of his innings, is becoming a rather permanent feature of the West Indian’s game, and one that is aiding him in finishing off matches. On Thursday as well, he remained unbeaten when the target was achieved. 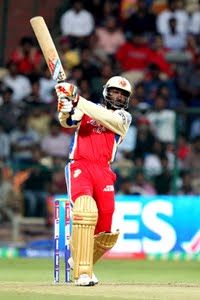 Even if you did not follow the game, it wouldn’t be difficult to judge the audacity of Gayle’s knock looking at his numbers. There were as many as nine big hits that cleared the fence, and the Kolkata bowlers had no answer to Gayle’s massive hitting spree. Under the circumstances, Kolkata definitely missed the leader of their bowling attack, Brett Lee. At the same time, the kind of murderous form Gayle was in, it would be difficult to assume that the Aussie speedster’s presence would have made a significant difference to the game. Also, while the others struggled, Sunil Narine kept things tight. But, the fact that he could not claim any victims hurt KKR.

While Gayle’s superb effort was undoubtedly the difference between the two sides, there were a few other impressive performers as well – the spat between Virat Kohli and opposition skipper Gautam Gambhir definitely wasn’t one of them. From a cricketing point of view, Kohli played a steadying hand even as Gayle went berserk. Bangalore needed someone to stay with Gayle after Mayank Agarwal fell early again. Kohli did exactly that, on the way himself playing some expansive shots. By the time he was dismissed, Bangalore we in a commanding position, and A B de Villiers did the rest in Gayle’s company.

Although Gayle completely took the game away from Kolkata, a better batting effort by the visitors could have put more pressure on him. Instead, Kolkata only managed a somewhat competitive total. Gambhir batted well for his half-century and Yusuf Pathan played a useful cameo, but they failed to get too many runs in the last few others, which harmed their cause. To their credit, Bangalore bowled exceedingly well. RP Singh, in particular, standing out.

Turning point of the game:Yusuf Pathan’s dismissal in 13th over. The kind of form Gayle is in, Bangalore can chase down any total. Had Yusuf stayed till the very end, it would have given Kolkata their best chance of winning.