Rajasthan Royals pulled off a miraculous victory over Sunrisers Hyderabad to make way to the Qualifier 2 Match of IPL 6. An absolute blinder from T20 veteran Brad Hodge stole what looked like a certain victory for the Sunrisers Hyderabad after they had the Rajasthan Royals in the dumps at 57 for 5 in 10 overs chasing 133 on a sluggish pitch at Delhi.

Batting first, Sunrisers lost a couple of early wickets and was pegged back by some tight bowling. Although Shikhar Dhawan batted out in the middle for a significant time, the Sunrisers hardly got any momentum going. Dhawan scored 33 from 39 balls with 3 fours while taking his side to 83 for 4 in the 16th over. Skipper Cameron White had worked hard for a 28-ball 31 in a 52-run stand with Dhawan for the third wicket.

The much needed energy for the Sunrisers came from Darren Sammy who came up with a crucial cameo of 29 from 21 balls with 3 sixes. Biplab Samantray scored a couple of useful boundaries to help the Sunrisers finish with 132 for 7. Medium pacer Siddharth Trivedi was the most nagging bowler conceding only 18 off his 4 overs.

Rajasthan Royals in their run chase lost Dravid early but were smashing at the target thanks to a ferocious innings from Shane Watson. Fortunately for the Sunrisers, Watson was contained for a 15-ball 24 as he was caught brilliantly by a leaping Sammy at deep mid wicket. Rajasthan at this stage had knocked off 50 runs in just 6.4 overs losing two wickets. 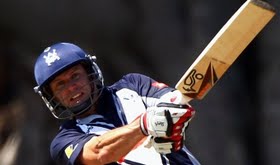 After Watson’s exit, the Sunrisers bounced back in style as the Royals lost three wickets in succession with the addition of just the four runs! One of them was a set Ajinkya Rahane (18 from 20 balls) who was caught and bowled by Amit Mishra in an early drive. At 57 for 5 in 10 overs, Rajasthan were heading towards a certain defeat but they still had plenty of reserve batting as someone of the caliber of Brad Hodge walked in at no.7! Hodge got stuck in and smashed the two SRH leggies for three sixes to revive Rajasthan’s hopes. Just when the Royals were easing through again, Steyn produced the wicket of Sanju Samson (10 from 21 balls) to reduce them to 102 for 6 in the 16th over.

Hodge continued his fight and with the support of Faulkner took the game to the last over with the Royals needing 11 to score from Sammy. Hodge held his nerve to score two consecutive sixes to finish off the chase without any fuss with still four balls left in the over. The Aussie veteran remained unbeaten with a 29-ball 54 that contained 2 fours and 5 sixes! Amit Mishra’s bowling efforts of 4-1-16-1 went in vain as a result.

Toss and Teams: Sunrisers Hyderabad led by Cameron White have won the toss and elected to bat first in the Eliminator Match against the Rajasthan Royals at the Feroz Shah Kotla in Delhi. The winner of this match will meet the Mumbai Indians day after tomorrow in Qualifier 2. The loser will be eliminated from the competition.

For the Sunrisers, Ishant Sharma comes back having missed the previous game because of an illness.