Loss to Pakistan a reality check for Australia

Australia may have qualified for the semi-finals of the World T20. However, their unconvincing performance against Pakistan reiterated that they are not invincible, at least not when facing quality spin.

Australia may have qualified for the semi-finals of the World T20. However, their unconvincing performance against Pakistan reiterated that they are not invincible, at least not when facing quality spin. The Aussie batsmen struggled to chase down a reasonable target, and in the end only just managed to scrape through to the semis. The loss, which also meant the end of another disappointing showing in an ICC event for South Africa, should give Australia’s opponents hope in the semi-finals and the finals, provided they qualify for the latter.

In the preview to this crucial encounter, it was clearly mentioned that Australia’s strength could also prove to be their weakness. Shane Watson had single-handedly carried the team’s batting on his shoulders so far, with support from opening partner David Warner. However, even the in-form duo had no answer to Pakistan’s quality spinners and fell cheaply. Once the Australian openers were dismissed, they were always likely to struggle, which is exactly what happened. Skipper George Bailey, Cameron White and Glenn Maxwell had done precious little in the tournament, and their lack of runs proved fatal, especially against a rampant Pakistani spin attack. 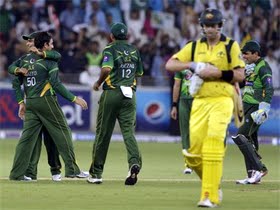 Australia were so poor at one stage they weren’t exactly sure of qualifying for the semi-finals. That they did so in the end was thanks largely to a fighting knock by veteran Michael Hussey. But for his half century, Australia could well have had to depend on other results to go their way to qualify. The left-handed Hussey played a precious knock, bringing all his experience into play to help Australia to safety. His reaction on Australia passing the qualifying mark, a vigorous punch of the fist, proved how tough the task had been for him.

To their credit, Pakistan exploited Australia’s weakness against spin rather adeptly. They stuck to spin for most part of the Aussie innings, with pace being introduced only in the 18th over. With their in-form men back in the pavilion early, the middle-order batsmen had no idea how to deal with the novel situation presented in front of them by Mohammad Hafeez. The skipper himself bowled wonderfully well, getting rid of two key batsmen in the form of Warner and White. Pakistan had done something similar to Australia during the ODI and T20 games in UAE. That experience definitely came in handy.

The performance of the match undoubtedly came for Pakistan left-arm spinner Raza Hasan. With his side not defending a tall score, and the dangerous Warner and Watson up against him, Hasan would have been under extreme pressure. Also, he’s only a newcomer, with hardly any international exposure. Still, Hasan did magnificently well to overcome the Watson challenge and strangle Australia. What the defeat means for the Aussies is that their opponents would now know the area to expose Australia. How George Bailey’s men react to the situation will decide how far they progress from here.