KKR Vs DD: Poor batting the cause of Kolkata’s downfall

Kolkata Knight Riders (KKR) may be the defending champions in the IPL, but they have only showed glimpses of their capability thus far. As a result of the same, their chances of qualifying for the second stage of the tournament are practically zilch unless of course something miraculous happens coupled with mathematical calculations that go in their favour.

Kolkata Knight Riders (KKR) may be the defending champions in the IPL, but they have only showed glimpses of their capability thus far. As a result of the same, their chances of qualifying for the second stage of the tournament are practically zilch unless of course something miraculous happens coupled with mathematical calculations that go in their favour. Following their shabby loss to Delhi Daredevils, who themselves are having a torrid run, on Wednesday at Raipur, things have only gotten difficult for Kolkata, but they have only themselves to blame for the situation.

Their batting performance on Wednesday was extremely poor, which all but cost them the game. Batting first, Kolkata needed to get off to sprightly start. Instead, their skipper Gautam Gambhir was run out without facing a ball, and the other opener, Manvinder Bisla, did not hand around too long. The most disappointing aspect of Kolkata’s innings was that all their remaining batsmen got into double figures, but not one of them managed to reach the 30’s. This pretty much translated to the fact every time a batsman got in, he got out. The Kolkata thus got stuck in no man’s land. 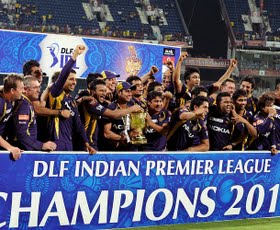 Yusuf Pathan, Jacques Kallis, Eoin Morgan and Debrata Das combined to face the majority of the crucial middle overs, but not one of them was present when the final few overs kicked off. The top and middle order, in fact, left Kolkata in a hapless position, from where it seemed they would struggle to end with a run rate of even six. If at all Kolkata managed to gain some respectability, it was because of some smart batting from Sumit Narwal and a couple of lusty hits by Brett Lee, which gave the innings the flourish that was needed.

For Delhi, most of the bowlers were top notch on the day. Irfan Pathan continued his great run for an underperforming side, conceding only four runs an over, running out the opposition skipper and also picking up the massive scalp of Jacques Kallis. Pathan was ably supported by Morne Morkel and Shahbaz Nadeem, both of whom were successful in keeping the runs down. And, while Umesh Yadav went for a few, he compensatedby striking a couple of big blows. Overall, it was a highly efficient bowling performance by Delhi, which never allowed Kolkata to dominate the proceedings.

Kolkata still had hope, well aware that most of Delhi’s batsmen are out of form. They did sense an opportunity early on after they snuffed out openers Mahela Jayawardene and Virender Sehwag. However, the move to push David Warner down the order worked wonders for Delhi again. Ever since he has begun batting in the middle-order, Warner has been a completely transformed character. Yet again, the left-hander shepherded the chase, and took the game to its logical conclusion. The big shots did come, but Warner ensured there were no rash strokes, and Delhi were home safely.

Turning point of the game: Gambhir’s dismissal without facing a ball, which set the tone of the match.