Sri Lanka opened its account in the Super Eights following a Super Over win over New Zealand. Chasing 175, the hosts were well on course to reach the target but somehow after a few quiet overs, the match was back in the balance.

Sri Lanka opened its account in the Super Eights following a Super Over win over New Zealand. Chasing 175, the hosts were well on course to reach the target but somehow after a few quiet overs, the match was back in the balance. The last over saw Sri Lanka needing 8 runs to win from Tim Southee whose widish yorkers made it real tough. With just one needed to win from the final ball, Jeevan Mendis was run out miraculously at the bowling end with the ball dropping off Ross Taylor’s body onto the stumps with the former well short of his crease.

With the match ending in a tie, the winner was to be decided by the Super Over. Sri Lanka scored 14 from that and New Zealand couldn’t get the runs against the fast yorkers from Lasith Malinga. 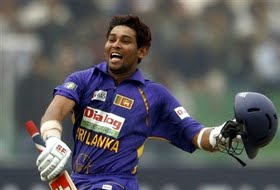 Early on, it was a dream start for the Lankans as Skipper Mahela Jayawardene (44 from 26 balls with 3 fours and 3 sixes) and Tillakaratne Dilshan putting on 80 for the first wicket in just 7.2 overs. Dilshan slowed down after his fifty and with a couple of wickets falling at the other end, Sri Lanka lost its momentum. New Zealand came back strongly in the final overs as the pressure for the first time mounted on the Lankans. Dilshan got out in the 19th over after a great knock of 76 (from 53 balls with 5 fours and 3 sixes) and thus fell short of seeing Sri Lanka past the target of 175.

Toss and Teams: New Zealand have won the toss and elected to bat first in the Super Eights Match against hosts Sri Lanka at Pallekele. The pitch is expected to be a flat and dry surface. Spinner should be encouraged because of the dry pitch on offer.

As far as the team compositions are concerned, Sri Lanka have given debut to ‘mystery spinner’ Akila Dananjaya. Ajantha Mendis, the other mystery spinner comes back in the side after an injury. The Lankans have therefore made two changes to their line up with Dananjaya and Ajantha Mendis replacing Dilshan Munaweera and Rangana Herath.

New Zealand have made just the one change with Martin Guptill returning to the side after his injury. Making way for him is fast bowler Adam Milne.