Making an international comeback after about 7 months, Yuvraj Singh produced a gem of a knock to carry India to victory in the Only T20I against the Aussies at Rajkot.

Making an international comeback after about 7 months, Yuvraj Singh produced a gem of a knock to carry India to victory in the Only T20I against the Aussies at Rajkot. On what was a dead batting pitch, Yuvraj Singh had the perfect opportunity to make a dream comeback especially with his side in the woods at 100 for 4 chasing a tall target of 202. Yuvraj relied on his sweet timing to score a blistering 77 not out from 35 balls as India chased down the formidable target with a couple of balls to spare with six wickets in hand. 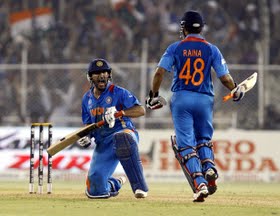 Yuvraj’s splendid knock overshadowed Aaron Finch’s powerful knock of 89 from 52 balls. Finch smacked his runs with 14 fours and a six. Along with debutant Nic Maddinson, Finch took Australia to a flier taking them to 56 for the first wicket in 4.5 overs. The left-handed Maddinson (39 from 16 balls with 6 fours and a six) was the first to depart after getting his off stump pegged back trying to pull Bhuvneshwar Kumar. Australia appeared to have lost some momentum at 84 for 3 when they lost Shane Watson and Skipper George Bailey in the 8th over bowled by Vinay Kumar. But Glenn Maxwell joined Finch to add 40 runs for the 4th wicket in no time.

Maxwell clobbered four sixes but his damage was controlled to a 13-ball 27 as he got out to a great catch from Ishant Sharma in front of the ropes off Jadeja. India did reasonably well through Ravindra Jadeja (4-0-23-1) and its two pacers – Bhuvneshwar Kumar (4-0-35-3) and R Vinay Kumar (4-0-26-3) to prevent the visitors from running away to what could have been a much bigger total.

Australia finished with 201 for 7 with Aaron Finch missing out on a well deserved century. The explosive opener was caught and bowled by Vinay Kumar off a juicy full toss in the 17th over. After his dismissal, India managed to dry up the boundaries.

In the second half, although India lost three key wickets, the momentum was good with Shikhar Dhawan striking the ball crisply. Rohit Sharma and Suresh Raina both struck a six each but didn’t last long enough. Dhawan scored 32 from 19 balls with 5 fours to set the platform for the middle order before he was stumped out off Xavier Doherty. Virat Kohli contributed 29 from 22 balls before falling early in the 12th over caught in the deep with a wristy flick.

India was in the woods at 100 for 4 when Skipper MS Dhoni joined Yuvraj in the 12th over. Dhoni afforded to play second fiddle with his 24* (from 21 balls) while leaving all the heroics to be done by Yuvraj Singh. The southpaw hit the ball sweetly to all parts of the ground. Yuvraj struck 8 fours and 5 sixes in his 35-ball cameo to take India to a thrilling finish while the Aussies struggled to grip the ball because of the dew.

Toss and Teams: India have won the toss and opted to bowl first in the Only T20I against Australia at Rajkot. The pitch has been prepared to be batsmen friendly but it has also been under covers because of the rains. And the forecast for the game isn’t promising with rain likely to interrupt the proceedings.