Ponting spot on in his assessment of Lara Vs Sachin

Comparisons between Sachin Tendulkar and Brian Lara are never ending. While it is a foregone conclusion that Tendulkar is the more successful of the duo, the match-winning skills of the Indian maestro have often been debated in contrast to those of Lara’s.

Comparisons between Sachin Tendulkar and Brian Lara are never ending. While it is a foregone conclusion that Tendulkar is the more successful of the duo, the match-winning skills of the Indian maestro have often been debated in contrast to those of Lara’s. Another retired Aussie legend Ricky Ponting has made an interesting observation, that in terms of being a match-winner, the West Indian is ahead of the Indian. In Ponting’s own words, “Lara won more games for his team than Sachin probably has. You always found a way to restrict Sachin if you needed to. Lara could turn it on in half an hour and take a game away from you.” 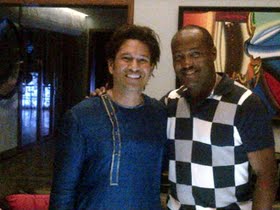 While many would debate the basis of Ponting’s statement, the fact is that the Aussie has a fair point –that Lara was a bigger match-winner than Tendulkar. The Australians have been on the receiving end of Lara’s magnificence more than once. Who can ever forget the Frank Worell Trophy in 1999, when Lara singlehandedly was responsible for the 2-2 scoreline? His 213 at Jamaica was champion stuff and the unbeaten 153 at Barbados was nothing short of miraculous considering Lara had only the tail for company for most part of his chase.

Statistically, Tendulkar is ahead of Lara in all respects, which definitely makes him the greater player. No two ways about that. However, what Ponting is referring here is to the psychological impact of the two players, which is where Tendulkar lags behind. He may have scored the most number of runs in international cricket, but for sure he must not have given as many sleepless nights to opposition skippers as Ponting explained. What Tendulkar lacked at his prime was possibly that intimidating factor, which is why it was easier to restrict Tendulkar as opposed to Lara.

Ponting also indirectly took a dig at Tendulkar’s record-breaking tons stating, “For me, it has never been about making hundreds, it is about winning games and series.” Taking nothing away from Tendulkar’s unmatchable achievements, here again it must be understood that we in India give more preference to individual glory, which is one of the reasons, Tendulkar has been under so much pressure to score hundreds over the years, irrespective of the result of the match. Remember, even his historic 100th international ton came in a losing cause against minnows Bangladesh.

When Tendulkar was India’s one-man army in the 1990s, he played some brilliant knocks, but did not clobber opponents as Lara did. Post 2001, Tendulkar was joined by some greats in the batting order, which culminated in India reaching the number one position Tests as well as ODIs. Lara remained a lone ranger throughout his career, and while he kept playing spectacular knocks mostly in losing causes, it was the fear factor that made Lara the more dangerous of the two players. One only hopes that ex-Indian players come out in criticism of Ponting. His comparison was not about numbers, Lara being the clear winner.