Champions Trophy 2017: Kohli says bowlers did it against Bangladesh

Indian skipper Virat Kohli was extremely pleased after the team successfully overcame the Bangladesh challenge to cruise into the final of the ICC Champions Trophy 2017. India made it out the final for the fourth time, and Kohli credited his bowlers for the same.

"Well, outstanding. Especially the last two games they've been terrific initially and in the later stages, as well, their wicket-taking ability, which is something the opposition always knows, so they're always careful going hard against these two guys, and yeah, their length after the Sri Lanka game, the length and line has been impeccable, so consistent, bowling close to the batsmen, always there with an opportunity to get a wicket, as I mentioned. Even in conditions which are not offering too much bowling such lines that we can produce wicket-taking opportunities,” Kohli said in praise of Jasprit Bumrah and Bhuvneshwar Kumar. 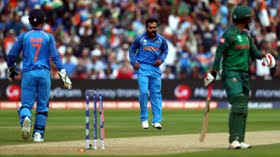 "Big credit to both of them for getting us where we stand right now. A lot of credit goes to both of them, as well, for having bowled the way they have in the last two games,' h further added.

The Indian bowlers kept Bangladesh to 264, and then cruised to a nine wicket win as Rohit Sharma (123*) and Kohli (96*) settled in.

"Well, it's not been difficult at all. I'm really enjoying the way I'm batting. For me the number of runs do not matter at this stage. I'm really enjoying the process, and something which is, you know, giving me joy is that whatever I'm practising and how I prepared after the IPL is paying off in this tournament. So I'm pretty happy getting the team across the line, honestly. Doesn't matter if it's three wickets or two or even one. I want to apply myself in any situation possible. Last game was a bit more challenging in terms of chasing a low total and we lost one early wicket so I had to apply differently," said Kohli.