England pulled off a tremendous fightback in the final session of Day 3 with its opening batsmen putting on an unbroken century stand. Batting out 38 overs in the final session safely, Skipper Alastair Cook led the way with an unbeaten 74 (from 124 balls with 13 fours).

England pulled off a tremendous fightback in the final session of Day 3 with its opening batsmen putting on an unbroken century stand. Batting out 38 overs in the final session safely, Skipper Alastair Cook led the way with an unbeaten 74 (from 124 balls with 13 fours). Debutant Nick Compton grew in confidence to collect 34* (from 104 balls with 2 fours).

The Indian bowling looked pretty flat with the pitch not misbehaving much and the two English openers showing good footwork. England still have a lot of batting to do to save this Test match as the deficit is still 219 more runs to clear and make India bat again.

Tea Report: England have been asked to follow on after getting bowled out for 191 a few minutes before Tea. The visitors have conceded a mammoth first innings lead of 330 runs. Pragyan Ojha was the bowling hero for India taking his 4th five-wicket haul in Tests.

The visitors showed some resistance in the final session through the 8th wicket stand between Matt Prior and Tim Bresnan. Pragyan Ojha broke what was a 47-run partnership for the 8th wicket by having Tim Bresnan (19 from 60 balls) edging his forward defence to gully. No. 10 Stuart Broad launched a counter attack and quickly got 25 (from 23 balls with 2 fours and a six) before Zaheer Khan got a lucky lbw decision in his favour through a reversing inswinger.

Matt Prior (48 from 100 balls with 7 fours) was the last man dismissed when he got clean bowled by Ojha in an attempted lofted drive inside out over covers in the 75th over. Pragyan Ojha finished things off with superb figures of 22.2-8-45-5. Ashwin settled with 24-9-80-3 while Umesh Yadav and Zaheer Khan got a wicket each.

Lunch Report: England are staring at a possible follow on in the Ahmedabad Test as they went to Lunch on Day 3 at a disastrous 110 for 7 in 52 overs! The visitors are trailing behind by 411 runs while the follow on target of 322 is also far away from their reach. It simply was a fabulous morning session for India as they bowled as many as 34 overs and picked up five wickets while giving away only 69 runs!

England started off the day in a shaky manner with Kevin Pietersen very uncertain against Pragyan Ojha. But soon got into his own and with Cook was seeing off the early spin threat. However, after 45 minutes of play, Pietersen (17 from 39 balls) played inside the line to a Pragyan Ojha delivery which drifted in around middle and straightened to hit the exposed middle stump to have England at 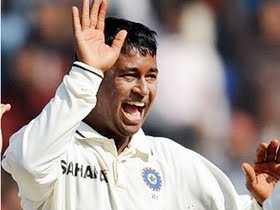 69 for 4 in the 33rd over. In the very next ball, new man in Ian Bell danced down the track and went through with a mindless lofted shot off a turning ball from Ojha but only to get caught by Tendulkar at mid off for a first ball duck! England were now 69 for 5 with Ojha on a hat-trick.

Alastair Cook defied a hat-trick to Ojha but in the 40th over was lured into an expansive cover drive on the frontfoot to a well tossed up off break from Ashwin. The result was Cook (41 from 109 balls with 7 fours) edging one straight into the safe hands of Sehwag at slip while England slipped further to 80 for 6. By Lunch, India got a bonus wicket with Umesh Yadav lucky to get an lbw in his favour in his first over of the match with a skiddy low inswinger that hit Samit Patel (10 from 49 balls) infront of the leg stump and possibly going down.

At Lunch, England have Wicket Keeper Matt Prior on 20* (from 40 balls with 4 fours) along with all-rounder Tim Bresnan (0*) at the crease.

Build Up to Day 3: England will resume the third day’s play under huge pressure at 41 for 3 in reply to India’s 521. Alastair Cook and Kevin Pietersen have the responsibility to defy the Indian bowling and atleast take England past the follow on target of 322. The visitors have batting right till no.11 but on a pitch that is taking lots of turn, it will be a tough challenge to survive.

India has so far started exceedingly well. While the pitch looked almost lifeless for the English bowlers, their counterparts – R Ashwin and Pragyan Ojha have extracted quite a lot of bite already. There should be reverse swing happening soon for the likes of Zaheer Khan and Umesh Yadav which should be the added bonus for India.