It was a fifth defeat for Team India in a row on this tour of Australia. Even in the T20 format of the game, there was no respite for the visitors as they went down by a comprehensive margin of 31 runs in the First match at Stadium Australia in Sydney! India strangled by the Australian spin attack tamely finished at 140 for 6 chasing a target of 172.

Highlights of India Innings : India continued to have a bad start from its openers. In this first T20I, Virender Sehwag departed in just the third ball of the innings when he got caught at slip looking to whip across the line to a pacy outswinger from Brett Lee. Gautam Gambhir (20 from 14 balls with 3 fours) looked alright with the in-form Virat Kohli but in the 6th over got caught at covers looking to go inside out to a David Hussey off break. Virat Kohli looked in good touch hitting Lee for a six but fell for a 21-ball 22 when he miscued a pull shot off Brad Hogg into the hands of long on in the 7th over.

The visitors went onto lose another wicket three balls after Kohli’s exit in the form of Rohit Sharma for a first ball duck when David Hussey got one to grip and turn to brush the pad of the right hander and deflect through his gate onto the stumps. In the 12th over, Suresh Raina (14 from 15 balls) had his stumps rattled as he made room and missed a big shot to an inswinger from Daniel Christian to make it 72 for 5. By thins time, India had almost conceded defeat with just the one recognized batting pair left.

Daniel Christian picked up his second wicket when Ravindra Jadeja toe ended a big shot in the 14th over to get caught by the forward running David Warner at long off. India slipped towards an inevitable defeat at 81 for 6 with Skipper MS Dhoni only able to scratch around aimlessly. Dhoni with R Ashwin (15* from 16 balls) could only ensure that India batted out the rest of the overs to just reduce the margin of defeat. MS Dhoni missed out on a half century as he ended up with an unbeaten 48 from 43 balls with a four and three sixes. It wasn’t an impact innings at all from Dhoni as he took too long to get his eye in.

Left-arm chinaman bowler Brad Hogg in his comeback was completely dominating with his wide variety as he gave only 21 in his 4 overs besides removing Virat Kohli. The orthodox left-arm spinner Xavier Doherty gave only 23 in his 4 overs as well by bowling mostly in the blockhole. The third spinner David Hussey bowled a crucial spell of 2-0-4-2 which really dented India’s chances. Wicket Keeper Matthew Wade for his 72 got the Man of the Match. 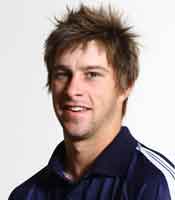 Highlights of Australia Innings : Australia have set a target of 172 for India to win the First T20I at Stadium Australia in Sydney. Under wet and slippery ground conditions, India did a reasonable job to ensure that Australia did not run away with a much bigger total.

The hosts put into bat first by MS Dhoni got off to a breezy start of 38 in 3.5 overs before David Warner (25 from 14 balls with a four and two sixes) miscued a lofted shot off Vinay Kumar to covers. Another opener Matthew Wade batted well to add 41 runs for the second wicket. Travis Birt (17 from 21 balls) coming in at no.3 was caught at covers after driving a full toss from Ashwin in the air. The match was briefly halted because of rain but luckily the action returned quickly with no overs lost.

It was a 56-run partnership between Matthew Wade and David Hussey for the 3rd wicket took Australia further forward in the middle overs. Wade who scored a maiden T20I fifty in 36 balls fell at a personal score of 72. He got out in the 16th over trying to play a cut shot but missing a quicker one from Suresh Raina to get bowled. Matthew Wade’s 72 came in 43 balls with 5 fours and 3 sixes.

The Australian were given a nice finish by David Hussey who scored 42 in 30 balls with a four and three sixes before falling to the penultimate ball of the innings to Rahul Sharma. Australia’s new T20I Captain George Bailey remained unbeaten on 12 from 11 balls.

Early on, India had an injury scare when Rahul Sharma split his webbing while trying to take a return catch offered by Travis Birt. Rahul Sharma left the field midway in his first over but returned back later to do well with figures of 3.4-0-27-1.

Toss and Teams : Skipper MS Dhoni called heads rightly to win the toss in the First KFC T20I against Australia at the Stadium Australia in Sydney. Dhoni has asked Australia to bat first as his team wants to chase in a match that could be affected by rain any moment because of the overcast conditions. George Bailey has made history by Captaining Australia in his Debut International.

Apart from George Bailey, two other Australians were making their T20 debut and they are left-arm pacer James Faulkner and left-arm-spinner Xavier Doherty. For India, tall leg spinner Rahul Sharma made his T20I Debut.