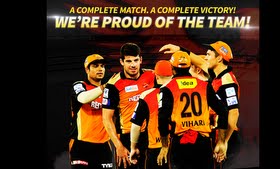 Winning the toss Sunrisers Hyderabad opted to bat first but they found themselves in trouble when both of their openers were back in the dug- out at the score of just 31 runs. SRH batted cautiously in the middle overs and they not lost too many wickets which proved to be a masterstroke in later stage of the inning. They accumulated 64 runs in the last five overs to ensure Hyderabad reaches 163/4. Moises Henriques was absolutely magnificent with his power hitting as his 46 balls 74 runs was laced with only one four and five huge sixes.

Nathan Coulter-Nile picked up two wickets and bowled very cheaply in the middle overs. Amit Mishra and Albie Morkel proved to be very expensive for Delhi as they conceded 69 runs in six overs together without picking up any wicket.

In reply to SRH’s 163/4, DD finished with 157/4 with half century from Quinton de Kock and Kedar Jadhav. Karn Sharma with 2 wickets was the pick of the bowler for Hyderabad.

The start for Delhi was not perfect as the in-form Shreyas Iyer got out without scoring. de Kock hit his first IPL half century in 29 balls which included nine fours and one six to put up a crucial partnership with skipper JP Duminy. But Delhi lost their way a bit when they lost de Kock, Yuvraj and Duminy in just a span of two overs. De Kock was drawn out of his crease by flight from the leggie Karn Sharma and South African missed the ball to get stumped. Yuvraj Singh (2) too didn’t troubled the scorer much and was perished in the next over when he was caught by Karn at long on off Parvez Rasool.

Karn again came in highlights when he cleaned up Duminy in his very next over to reduce Delhi to 66 for 4. But the hosts pulled things back thereafter as Kedav Jadhav scored a quick 63 off 34 balls and stitched a partnership of 91 runs with Saurabh Tiwary. They almost took Delhi home but the brilliant penultimate over form Bhuvneswar Kumar made the difference. With 22 runs needed of the last two overs, Bhuvneshwar Kumar conceded only 6 runs in the 19th over to leave 16 runs for Ishant Sharma. Though Ishant was hit for a boundary on the first delivery of the last over but 16 runs still proved to be a lot for Delhi Daredevils and they fall six runs short.

With this win over Delhi Daredevils, Sunrisers Hyderabad has jumped on the fourth spot of the point table. This also hammered the slim chances of Delhi to make it to the play-offs. Points table is looking wide open now and Royal Challengers Bangalore, Mumbai Indians and Sunrisers Hyderbad will fought it hard for the fourth spot.