India dominated day two of the third and final Test at Indore. They posted a massive 557 for 5 on the board before declaring. New Zealand finished the day on 28 for no loss, having survived nine overs. Here are some interesting numbers from the day’s play

India dominated day two of the third and final Test at Indore. They posted a massive 557 for 5 on the board before declaring. New Zealand finished the day on 28 for no loss, having survived nine overs. Here are some interesting numbers from the day’s play.

Virat Kohli and Ajinkya Rahane added a huge 365 runs for the fourth wicket. This is India’s highest fourth-wicket partnership ever. They beat the 353 by Sachin Tendulkar and VVS Laxman at Sydney in 2003-04. In addition, the Kohli-Rahane stand is also the fifth highest partnership for any wicket as far as India is concerned. Also, this is the second highest partnership for India against New Zealand for any wicket, after Vinoo Mankad and Pankaj Roy’s 413 at Chennai in January 1956. 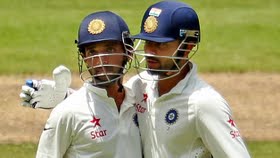 Interestingly, this is only the second occasion that both India’s No. 4 and No. 5 notched up more than 150. The previous instance was also when Tendulkar and Laxman made 241 not out and 178 at Sydney in 2003-04.

In terms of time spent, Kohli and Rahane came together at the crease in the 36th over, and were separated in the 148th over when Kohli was eventually dismissed for 211. In all, the pair faced a mammoth 672 balls.

Rahane has taken the term consistency to another level with his superlative performances. Except for debut series against Australia at home in 2012-13 when he managed only 8 runs in one Test, Rahane has crossed 90 in every series he has played. In fact, if you take out India’s tour of South Africa in 2013/14 and the one-off Test against Bangladesh, he has crossed hundred in every other series. The streak includes a hundred in each innings against the Proteas at Delhi in December 2015.

Kohli is now the fifth Indian batsman to score two double tons in a single calendar year. Before him, Vinod Kambli, Rahul Dravid, Sachin Tendulkar (twice) and Virender Sehwag have achieved the feat.

Kohli’s hundreds are also becoming bigger. By the time he had scored his first seven Test tons, his highest was 119. His last six Test tons make for significantly better reading -- 141, 169, 147, 103, 200 and 211. His next target would be most double hundreds by a Test captain in a calendar year. Michael Clarke had four in a year, and Brendon McCullum three.