Rahul Dravid shut out reports which said that Virat Kohli has been denied rest during the Test series against Sri Lanka next month.

Rahul Dravid shut out reports which said that Virat Kohli has been denied rest during the Test series against Sri Lanka next month.

On the other hand, Dravid was quoted as saying in a DNA report, “Everyone needs rest. Virat Kohli will get rest when he wants. I don't know why there is so much of discussion and controversy."

Dravid was speaking at a felicitation function for women cricketers. "Rotations are needed. There are a lot of matches being played, so you need to rotate the players. I think the management is taking right decision,” he added. 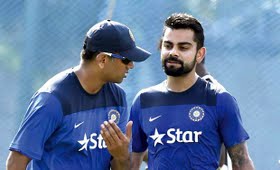 Asked about the ICC's decision to start the ODI and Test league, he opined, "I think having the context to especially ODI cricket and series is really important and sometimes in tri-series and bilateral series it can get a bit difficult to generate that level of context.

"But if you are having that sort of context towards a particular end goal in mind then surely something good can come out of it. If it creates that level of interest and context in bilateral series it will be a good thing,” he further added.