Aus vs SA 4th ODI preview: Aussies look to bounce back against Proteas

With all the teams registering one win and defeat each in tournament so far in the Guyana leg, Australia and South Africa will look to inch ahead as they meet in St.Kitts on Saturday. The last time the teams met a few days back

With all the teams registering one win and defeat each in tournament so far in the Guyana leg, Australia and South Africa will look to inch ahead as they meet in St.Kitts on Saturday. The last time the teams met a few days back, South Africa were in roaring form. In spite of putting up a total under 200, they managed to overpower the Aussies, and that too with a bonus point. The performance came after they had been outdone by West Indies in the series opener having put up a similar score. Australia, in fact, had gone into the match having defeated West Indies. As such, they would have been confident, but South Africa were too good for them.

Batting is definitely a big worry for both sides. While it is definitely true that the conditions at Guyana were loaded in favour of the bowlers, the batsmen should still be doing better. Having collapsed rather miserably against South Africa, Australia will be keen to make significant improvements. In the last match, Aaron Finch chipped in with a quality 72 while Nathan Lyon contributed 30 lower down the order. Yet, the Aussies went down without much of a fight. David Warner had a rare failure, and the lack of fight without his contribution will worry the team. The trio of skipper Steven Smith, Usman Khawaja and Glenn Maxwell must begin to fire.

South Africa too have problems in their bowling considering they haven't got 200 in two games. They wouldn't even have got close to 190 in the previous match had Farhaan Behardien not chipped in with a hard-fought century that made a big difference in the end. Even so the Proteas will be looking for bigger efforts from their famed batting line-up. Skipper AB de Villiers is yet to come good so he will be raring to go. Hashim Amla has got starts but hasn't converted them while JP Duminy and Faf du Plessis too are on the lookout for runs. The injury to Rilee Rossouw is a setback of sorts, but South Africa will have to find a way to play around it.

The situation is much better in the bowling department, at least so far, considering how conducive the surfaces have been. Looking at Australia first, Nathan Lyon has done very well for them, restricting the runs and, more importantly, picking up wickets as well. There remain concerns about his ODI inclusion affecting his Test form, but only time will answer that. Lyon has been well supported by Adam Zampa in the spin department. As a duo, they have definitely impressed. Nathan-Coulter Nile, as usual, has been effective while left-arm seamer Mitchell Starc has made a potent comeback. They are definitely capable of troubling the South African batsmen. 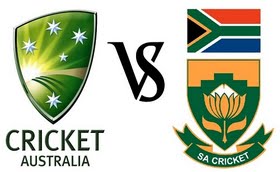 The Proteas' bowlers have also done a good job in the absence of Dale Steyn. Wayne Parnell has been rather surprisingly effective even as Kagiso Rabada continues to remain effective. The way things are, it doesn't seem long before Rabada will become the team's strike bowler. Morne Morkel is doing the job expected of him. But, like the other two teams, it has been spin that has been rather impressive. Aaron Phangiso is slowly beginning to make a name in international cricket while Imran Tahir continues to blossom even this late in his career. There wasn't much of Tabraiz Shamsi on offer in the previous game, but he definitely has some promise.