NZ vs AUS 1st Test: In the end, the landmark 100th Test at Wellington did not go according to plan for outgoing skipper Brendon McCullum as the visitors, Australia, thrashed them by an innings margin.

In the end, the landmark 100th Test at Wellington did not go according to plan for outgoing skipper Brendon McCullum as the visitors, Australia, thrashed them by an innings margin. This was a total reversal from the ODIs, which the Kiwis won handsomely. Somehow, New Zealand just could not bring out their A game in the opening Test. Australia, on the other hand, came out all guns blazing, and dominated with both the bat and ball. There were hardly any sessions that went New Zealand's way in spite of the fact that they were playing on their home ground. It wouldn't be wrong to say that Steven Smith's men were completely dominant in the Test. 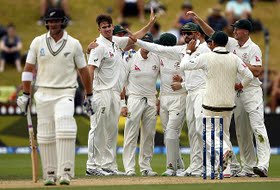 Looking back at the game, New Zealand would rue their batting collapse on the opening day. Having been bowled out for under 200, it was always going to be next to impossible for New Zealand to come back. While there was something in the pitch for the bowlers, and the Aussies exploited the same exceptionally well, it is also true that New Zealand could have batted much better. Having been dismissed cheaply, the only hope for the Kiwis was if their bowlers put up a tit-for-tat performance. But, that wasn't coming, and the Australian batsmen made merry as conditions eased out for the batsmen.

There were numerous positives that Australia would take out of the Test, which would please them no end following the disappointing results in the shorter formats in recent times. Josh Hazelwood was the star on the opening day. His four-for, including the scalps of the openers, which he claimed cheaply, destroyed the Kiwi resistance. Hazelwood found perfect support in Peter Siddle, who chipped away as he has been known to over the years. The spin of Nathan Lyon also suffocated New Zealand. The visitors displayed better resistance in their second essay, but Lyon and Hazelwood were again among the wickets. This time, they were joined by Mitchell Marsh.

So strong was Australia's bowling effort, we haven't even spoken about man of the match Adam Voges, who came up with another marathon effort -- a double century. Voges just seems to be going from strength to strength with each passing Test. He held the innings together with such maturity, it seemed he has been part of this team for ages. While Voges undoubtedly stood out, the Test saw another impressive hundred by Usman Khawaja, who is having a dream run in his second coming in international cricket. Skipper Smith also chipped in with a half century of his own, as Australia posted an imposing first innings total.

As mentioned earlier, New Zealand's batting led them down. Not a single batsman from the hosts' side managed to reach the three-figure mark. In fact, no New Zealand batsman reached fifty in the first innings, and only two, Tom Latham and Henry Nicholls, did so in the second. Kane Williamson had a rare failure, and it impacted the team badly, reiterating how crucial he is to the team's fortunes. Martin Guptill also could not carry his form into the Wellington Test. Last, but not the least, McCullum had a forgettable game, failing to make any impression. He will be hoping for better luck in his farewell Test.