Anderson one of the biggest sledgers: Smith

Australia captain Steve Smith has called England's James Anderson as “one of the biggest sledgers in the game” as the heat rose ahead of the second Test at Adelaide Oval.

Anderson had compared Australian tactics as equal to bullying in a column in a British newspaper. “I read the article, and it's interesting coming from Jimmy, calling us bullies and big sledgers,” Smith told reporters. 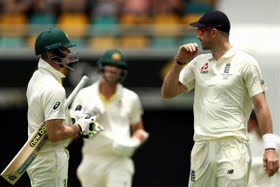 “I think he's one of the biggest sledgers in the game, to be perfectly honest. To me in particular, I remember back in 2010 when I first started and wasn't any good, he was pretty happy to get stuck into me then. Pretty interesting coming from Jimmy.”

Anderson claimed 24 wickets as England beat Australia 3-1 in Australia in 2010-11. Smith's highest score in that series was 54.