New Zealand captain Kane Williamson was emphatic after his team won the first Test against Bangladesh at Hamilton on Sunday by an innings and 52 runs.

New Zealand captain Kane Williamson was emphatic after his team won the first Test against Bangladesh at Hamilton on Sunday by an innings and 52 runs. Although Soumya Sarkar and Mahmudullah slammed hundreds, Bangladesh was way behind in the game after the Kiwis posted their highest Test total ever

Trent Boult returned claimed his ninth Test five-wicket haul, as Bangladesh were bowled out for 429. “We knew coming in today, it was going to be a big push with the ball. We knew the surface was not going to offer a huge amount – we’d thought the cracks might have opened up a little bit more,” Williamson was quoted as saying by ICC after the match.

“But we also knew that Bangladesh have a lot of quality in their batting line-up, and they showed that today. It’s great we were able to stick together for a long period of time, break that partnership, which was a good effort for them, and take the rest of the wickets,” he further added. 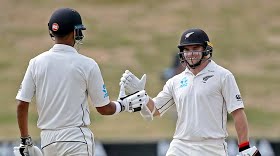 The Test saw hundreds from Jeet Raval and Tom Latham even as Williamson went on to register his second career double-century.

on the Latham-Raval partnership, Williamson said, “It was an outstanding partnership. Tom’s been brilliant the whole summer, almost every game. He’s just churning them out, which is brilliant for us.”

The second Test begins in Wellington from Friday, 8 March.