Mumbai Indians thrashed Delhi Daredevils by a huge margin of 44 runs at the Wankhede Stadium. The victory was granted for the hosts after they had batted out their opposition with a massive total of 209.

Mumbai Indians thrashed Delhi Daredevils by a huge margin of 44 runs at the Wankhede Stadium. The victory was granted for the hosts after they had batted out their opposition with a massive total of 209. Their only hurdle to overcome was David Warner, who did no harm to his reputation by playing a smashing knock.

Warner was the lone man who had the ability to take the Daredevils closer to the target of 210. But his damage was cut short to a 37-ball 61 with Mitchell Johnson foxing him with a slower one and getting him caught at deep covers. Warner’s entertaining knock contained 5 fours and 4 sixes. Apart from Warner, Under-19 cricketer Manprit Juneja played a promising innings although it never set the ground on fire. However, a score of 49 from 40 balls with 6 fours should give Juneja a lot of confidence to take his game to the next level.

For the record, Delhi Daredevils were kept down to 165 for 9 in 20 overs. The biggest highlight of the second half was the stunning one handed diving catch taken by Ricky Ponting to his right off the very first ball of the Delhi innings. Unfortunately the man at the receiving end of that great catch was India U-19 Captain Unmukt Chand who bagged his third golden duck of the tournament! 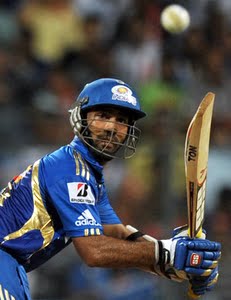 Karthik, Rohit power Mumbai Indians to a massive total: Mumbai Indians have piled up the highest total of this season so far, raking up as many as 209 runs on the board against a Delhi Daredevils attack that has two of the world’s fastest bowlers in Morne Morkel and Umesh Yadav. After a disastrous start of losing veterans Ricky Ponting and Sachin Tendulkar with just 1 run on the board, the homeside bounced back in style thanks to a spectacular knock from the in-form Dinesh Karthik. The Delhi Daredevils have just one big name in David Warner who is capable of getting his team anywhere closer to the target of 210.

Mumbai Indians would thank Dinesh Karthik for providing them the initiative. The Wicket Keeper batsman was unstoppable in his knock of 86 which came in just 48 balls with 14 fours and 2 sixes. The Wicket Keeper batsman was all set to hit the first hundred of this IPL season but missed out when he smacked Morkel into the hands of extra covers. Mumbai Indians were well placed at 133 for 4 in the 15th over when he got out and although Pollard didn’t do much damage, Mumbai Indians blasted their way to the first 200 plus total of IPL 6. Rohit Sharma was the man responsible for the onslaught in the second half of the Mumbai innings as he scored a high quality 74* from 50 balls with 4 fours and 5 sixes.

All the Delhi bowlers were punished by the pair of Karthik and Rohit. Nehra went for 49 in his 4 overs, Morkel for 43 in his 4 while Pathan conceded 37 off 3 overs after a first over maiden. Umesh Yadav, the other pacer was taken for 28 in his 3 overs.

Toss and Teams: Hosts Mumbai Indians have won the toss and elected to bat first against the Delhi Daredevils at the Wankhede Stadium. Lasith Malinga will be playing his first game of the tournament replacing Dwayne Smith for the Mumbai Indians. For the Daredevils, Sehwag continues to miss out because of an injury and their bowling has been boosted with Morne Morkel coming in for Andre Russell.