As it often happens in India, the pitch talk was the focus more than play at stumps on Day 1 at Pune. But, India's batting coach maintained that playing on turning tracks was one of the challenges for batsmen in Test cricket.

As it often happens in India, the pitch talk was the focus more than play at stumps on Day 1 at Pune. But, India's batting coach maintained that playing on turning tracks was one of the challenges for batsmen in Test cricket.

"The batsmen who have applied themselves have shown that runs can be scored on this track. It's not that there were unplayable balls. We never complain of anything when we go abroad, and it's just day one of a Test match. We are hopeful about what stands to come out of the next four days of cricket," Bangar was quoted as saying in a report by Espncricinfo.

Bangar went on to praise the application Australia's batsmen showed on a pitch turning from day one. "You could see that they were working hard, they were trusting their defence, used their feet quite a bit. So all facets of good batsmanship against spin bowling. We could see that they really applied themselves against our spinners today.

"Being good at facing spin bowling requires a lot of skill. It tests you quite a bit. Playing fast bowling is all about courage, but when playing spin, you have to make sure that your feet are to the pitch of the ball. If it's a turning ball, you have to be right on top of it to negotiate it. 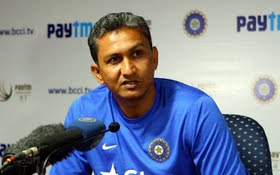 "If there's bounce on offer, shot selection becomes crucial. So all facets of batsmanship are tested playing against a quality spin attack like India. They showed a lot of application, and because of that they are able to be in the position that they are in," he further said.

Australia finished the day on 256 for 9 thanks to Mitchell Starc's fighting fifty, and Bangar termed it 25 too many.

"Obviously we would have been very happy had we batted in the evening.. All credit to Starc. He came out and backed himself and played some good shots. Because of that partnership they were able to end the day in a good position," Bangar admitted.