Never seen a spell like that in India for a long time: Rohit Sharma hails Prasidh Krishna

Indian captain Rohit Sharma hailed Prasidh Krishna for his match-winning spell against West Indies in the 2nd ODI of the three-match series in Ahmedabad on Wednesday. Krishna stunned the Windies with figures of 4 for 12 as India defended a total of 237 and clinched the three-match series 2-0 with a 44-run triumph.

Speaking after winning the game, Rohit said, “I have never seen a spell like that in India for a long time now. Prasidh bowled with a lot of pace and kept it going. The others complimented him.”

On winning the series, he admitted that it is a very good feeling. The 34-year-old added at the post-match conference, "Obviously winning the series is a good feeling. There were some challenges. The partnership between Rahul and Surya had a lot of maturity. We got to a respectable total in the end. We knew we could fight it out. The entire unit came out and bowled superbly. It is important for these guys to bat under pressure and that is how you will judge their character.” 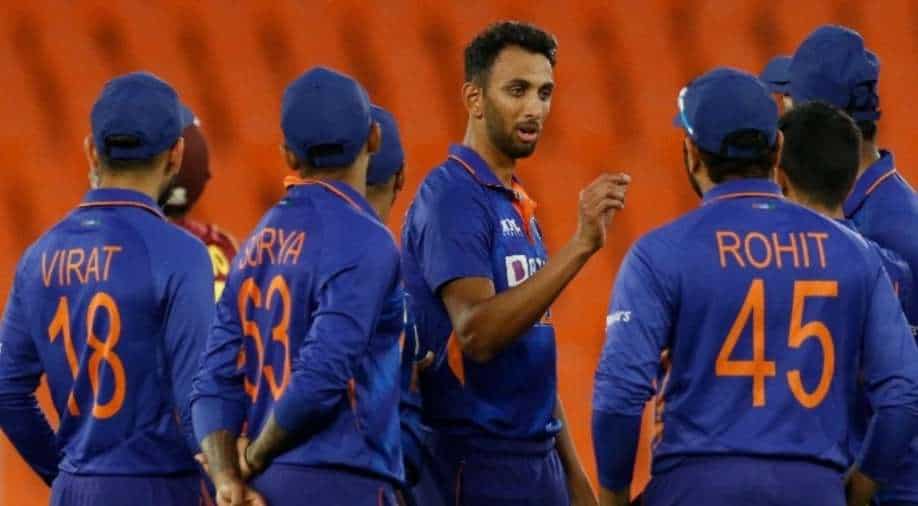 The skipper stated India don’t mind losing a few games to try out a few things. According to him the bigger picture is very important. He said, “It is important to look at the long-term goals. We will see what works out well for the team combination. I was a little surprised to see no dew.”

India were in trouble after being sent into bat on Wednesday. They slipped to 43 for 3 before Suryakumar Yadav and KL Rahul rescued them with fighting knocks of 64 and 49. India managed to reach 237 for 9 and then restricted the Windies to 193.

Praising, Yadav and Rahul, Rohit commented, "Surya had to take his time and understand what the team wants from him. KL also batted superbly as he is consistently up and down in the order. I have been asked to try something different. We wanted to try it one game. Shikhar should be back for the next game. When you have five bowlers and Deepak being sixth, you always need to keep rotating the bowlers.”

The third ODI will be played on Friday at the Narendra Modi Stadium in Ahmedabad. Rohit confirmed that Shikhar Dhawan will be available for the match.