Australia have proved they remain a strong ODI side

The ongoing one-day series between India and Australia has been interrupted temporarily as rain has wreaked havoc in the last two games. Hopefully, there will be no such issues during the last two matches to be played at Nagpur and Bangalore.

The ongoing one-day series between India and Australia has been interrupted temporarily as rain has wreaked havoc in the last two games. Hopefully, there will be no such issues during the last two matches to be played at Nagpur and Bangalore. Australia came into the series as underdogs, and even though they are still a win away from securing the series, it must be said that they can walk back with their heads held high irrespective of what happens in the last two matches. To come to India with an inexperienced squad and give the hosts a close run is an achievement in itself for the Aussies. 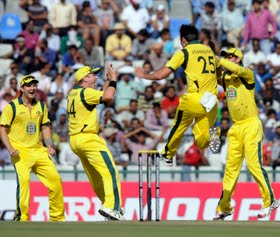 Remember, Australia were dealt by their biggest blow even before they arrived in India, when their skipper Michael Clarke was ruled out of the series due to injury. In his absence, Australia batting was expected to struggle, since the rest weren’t considered to be great players of spin, and most of them don’t have a lot of experience of playing in such conditions. However, the Aussies have thrown the theories out of the window, and have performed credibly, which explains why they are 2-1 up in the series.

The performance of Australia’s openers has been the biggest surprise story of the series so far. Neither was expected to perform as consistently as they did in the first three matches, which put India on the back foot right away. Phillip Hughes and Aaron Finch added 110 in the opening game, 74 in the second ODI and 68 in the third match. It was only in the fourth game that was ruined by rain that the partnership was broken cheaply. With both Hughes and Finch firing at the top, Australia have more often than not found themselves in comfortable positions during the series.

Australia’s skipper for the series, George Bailey, has also done incredibly well. Bailey, who leads the Aussies in T20s, is rated highly in Australia, but he wasn’t seen as much of a threat in India, evident by the fact that he did not even make it to the promotions in India for the series. In TV as well as print commercials, Shane Watson has represented the face of Australia, but Bailey has made sure Indians will remember him henceforth. He has not had a single failure in the series, and three of his four knocks have been sensational – 85, 92* and 98. There cannot be better examples for the term leading from the front.

Shifting focus to Australia’s bowling, they have also been in the game, unlike most of their Indian counterparts, who have proved to be redundant. The experienced Mitchell Johnson has bounced out a number of Indian batsmen while James Faulkner and Clint McKay have struck at crucial moments over the three games. Keep apart the Jaipur ODI, and their bowling has been reasonably effective. With the performance in the ongoing series, Australia have shown once again that, while their Test fortunes may be sinking, they remain a potent one- day outfit. --By A Cricket Analyst