IPL 2020 Match 15 RCB vs RR: Kohli back amongst the runs as he leads RCB to a comfortable win

We witnessed a trademark Kohli chase as he guided his team to an easy win over the Rajasthan Royals in the 15th match of IPL 2020 in Abu Dhabi. The Royal Challengers Bangalore skipper remained not out on 72 and Devdutt Padikkal scored an impressive 63 as their team won the match by 8 wickets to top the points table.

Steve Smith won the toss and chose to bat first. Smith came alongside Buttler hoping to pile on a lot of runs on a hot afternoon in Abu Dhabi. Their plans however, were cut short as captain Smith played on to Udana. Buttler hit a few boundaries but edged one off Saini to Padikkal at wide slip. Yuzi Chahal came to bowl the fifth over and struck with his very first ball as Samson offered a return catch and the bowler took it really well. Reduced to 31-3 inside 25 balls with all of their star batsmen back in the hut, RR’s chances looked bleak. 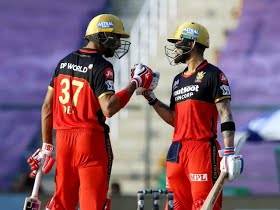 Newbie Mahipal Lomror joined veteran Uthappa, who was in desperate search of some runs. Run rate was kept under check throughout the first half as Washington Sundar and Chahal hardly gave anything away. Lomror showed intent as the match progressed with a boundary here and there. Uthappa was really struggling and ended his painful stay at the crease by lofting Chahal to Udana in the deep. At the 15 over stage, RR were placed at 99-4. Lomror got out for a quality knock of 47 as Chahal picked his third. Tewatia and Archer hit a few sixes as 38 came off the last 3 overs and RR finished at a modest 154-6.

RCB began their chase of 155 with some confident shots. Smith brought the leggie Gopal into the attack as early as the third over given his impressive record against RCB. The decision paid rich dividends as he trapped Finch with only his third delivery as that brought the under-firing RCB skipper Virat Kohli to the crease. Since the required rate wasn’t high, Kohli took some time early on to get settled in. That didn’t stop Padikkal from expressing himself as he played some delightful shots.

As the match went along, Kohli too found his groove as we say the trademark chase by Kohli in action. He struck a four and a six off Parag in consecutive balls to show glimpses of his personal best. With 5 overs remaining, only 37 runs were required as Kohli and Padikkal both got to their fifties. Padikkal however, was looking uncomfortable as Jofra Archer came and castled him with a full length delivery from around the stumps. Kohli was joined by ABD and we got to see some fine running from the duo given it was a day game and conditions were unrelenting. Kohli all but sealed the match in the 18th over by smashing three fours off Curran and ABD hit a boundary off the first ball of the last over as RCB won the match by 8 wickets.