India defeated Zimbabwe by 54 runs in first T20 match of the two-match series in Harare, Zimbabwe.

India defeated Zimbabwe by 54 runs in first T20 match of the two-match series in Harare, Zimbabwe. Mix batting effort from India set the target of 179 runs for the home team, but they could only manage 124 runs in their 20 overs and as a result they handed 54 runs victory India.

They were as many as five debutants for India in this match. Axar Patel, Stuart Binny, Kedar Jadhav, Manish Pandey and Sandeep Sharma, they all played their first T20 international. 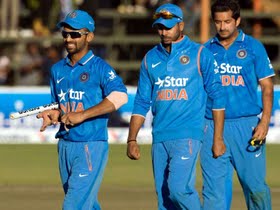 Chasing a score of 178 runs, Zimbabwe got the start what they were looking for. Chibhabha and Masakadza didn’t allow the debutant Sandeep Sharma to settle in and they scored 22 runs from his first two overs. 55 runs partnership for the first wicket was broken by the veteran campaigner Harbhajan Singh when Manish Pandey took the good catch to dismiss Chibhabha. This opened the gate for the Indian spinners. Axar Patel took two more wickets in the next over. Masakadza and Chigumbura were the two victims of Axar in the 10th over of the inning. From then on, Zimbabwe never looked like chasing the score. Charles Coventry too threw his wicket off Harbhajan Singh in the next over and by then Zimbabwe were reduced to 68-4 in 11th over. At last all Zimbabwe could manage was 124-7 in 20 overs.

Axar Patel (3-17) was star for India with the ball. Harbhajan Singh also picked up two crucial wickets and Mohit Sharma and Stuart Binny chipped in with one wicket.

Winning the toss and batting first, Indian opener started off in flash. Both Ajinkya Rahane and Murli Vijay punished the bad ball away. They added 64 runs in 7 overs for the first wicket before latter was dismissed run out by a direct through of Sikandar Raza. 19-balls 34-runs inning of Vijay was accomplished with five boundaries and a six. The wickets kept falling, but everyone chipped in with good contribution. Rahane (33) and Uthappa (39*) also played good hands. Rahane closed the face of the bat too early off Graeme Cremer and popped a catch which was gently accepted by Masakadza at covers. No any batsmen went on to score fifty but it was a complete team effort to stretch the scoreboard to 178-5 in 20 overs.

Chris Mpofu was the pick of the bowlers for the Zimbabwe. His 3-33 in his four overs restricted the scoring.

The second T20 match will be played on 19th of July where Zimbabwe will have a chance to bounce back and square the series but on the other hand India will like to conclude this tour with a win.

Man of the Match: Axar Patel