The Gujarat Titans (GT) will take on the Rajasthan Royals (RR) in Qualifier 1 of the Indian Premier League (IPL) 2022 at the Eden Gardens in Kolkata on Tuesday, May 24. Gujarat finished on top of the points table after the league stage with 20 points from 14 games. Rajasthan claimed the second spot at the last minute, displacing the Lucknow Super Giants (LSG). They finished with 18 points from 14 matches.

Although GT finished as table-toppers, they go into the playoffs having been hammered in their last match by the Royal Challengers Bangalore (RCB). Batting first, they posted a disappointing 168 for 5 despite an unbeaten half-century from their skipper Hardik Pandya. Openers Shubman Gill and Wriddhiman Saha have been in good form but the No. 3 spot is a massive issue. Will they stick to Matthew Wade, who hasn’t delivered at all?

In the bowling, Mohammed Shami and Rashid Khan have been the star performers on expected lines. R Sai Kishore has done a good job but Kiwi fast bowler Lockie Ferguson needs to rediscover his rhythm. Yash Dayal has done well in a couple of games but will GT risk his inexperience in such a big clash? 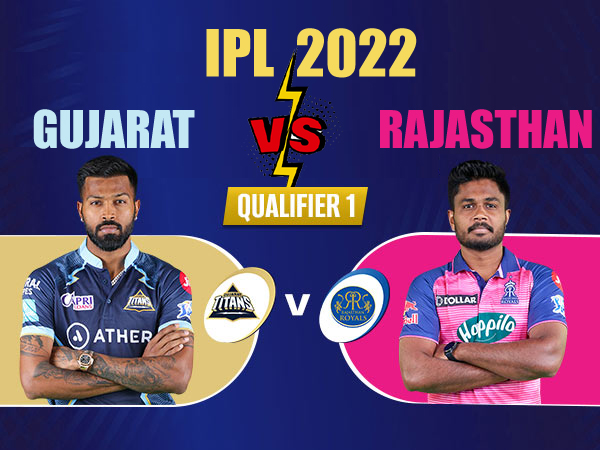 RR had gone down to GT when the teams met during the league stage. But Rajasthan will be a lot more confident heading into Tuesday’s playoff encounter. They came up with a clinical effort in their last league match against the Chennai Super Kings (CSK).

Bowling first, Obed McCoy and Yuzvendra Chahal claimed two wickets each without giving away too many runs to neutralize the impact of Moeen Ali’s blazing innings. Yashasvi Jaiswal kicked-off the chase with a sparkling half-century after which Ravichandran Ashwin played a fine knock of 40* in 23 balls. It was a memorable all-round match for him as he had impressed with 1 for 28 with the ball in hand.