Hosts Bangladesh have pulled off their best ever victory in their short international history by shocking India with a superb run chase. The diminutive Skipper Mushiqur Rahim who helped Bangladesh finish the run chase in style revealed that his side was determined to defeat India to pay tribute to their fellow player Manjurul Islam Rana who passed away five years ago on this date (16 March 2007) in a motor-bike accident.

Asked to chase a target of 290 on a flat batting surface, Bangladesh punished the lousy Indian bowling attack to pull off a remarkable victory by 5 wickets with four balls to spare. This was the highest target successfully chased down by Bangladesh in its ODI history. All the Bangladeshi batsmen barring opener Nazimuddin played their part to stun India. Sachin Tendulkar’s record 100th century went in vain and it was his slow knock that cost the Indians heavily along with the poor bowling attack.

This incredible victory from Bangladesh has opened up the Asia Cup with only Pakistan certain of a berth in the finals. India will have to beat arch-rivals Pakistan to make it to the finals. Bangladesh and Sri Lanka have a match against each other as well. So the team that will face Pakistan in the final is still going to be a mystery until this last game.

Well it wasn’t the best of starts for Bangladesh in their run chase of 290 as they lost their first wicket in the 5th over when Nazimuddin (5) heaved Praveen Kumar into the hands of mid wicket. Bangladesh steadied the ship after that through the 2nd wicket stand between Tamim Iqbal and Jahurul Islam. Although both the batsmen crossed their fifties, India looked in control as the duo didn’t take many chances.

In the 29th over, India managed to end the 2nd wicket stand which put up 113 runs when Jahurul Islam (53 from 68 balls with 4 fours and a six) dragged a slog sweep off Ravindra Jadeja to Rohit Sharma at mid wicket. Tamim Iqbal (70 from 99 balls with 6 fours) departed five overs later when he played an uppish cut off Praveen Kumar which was caught by a forward diving Jadeja at point to have Bangladesh at 156 for 3 in 33.5 overs.

Just when India seemed to have the match in their pockets, came an explosive partnership between Nasir Hossain and Shakib Al Hasan with the two youngsters playing their shots powerfully. Shakib Al Hasan was more severe and he took Irfan Pathan to the cleaners to reduce the equation in Bangladesh’s favour. The former Bangladeshi Captain added 68 runs for the 4th wicket with Nasir Hossain in just 48 balls! India had a huge relief when Shakib Al Hasan (49 from 31 balls with 5 fours and 2 sixes) got out through a smart stumping from MS Dhoni after the left hander was beaten by a square turning off break from R Ashwin in the 42nd over.

The Bangladeshi Skipper Mushfiqur Rahim remained unbeaten with a heroic 46 from just 25 balls (with 3 fours and 3 sixes) to see his side home with four balls to spare. The Man of the Match award went to Shakib Al Hasan for his superb 49 from 31 balls. 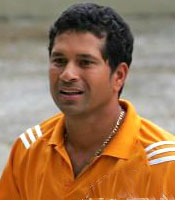 Sachin Ramesh Tendulkar, the World’s Best Batsman in the history of Cricket finally brought up his 100th international century! The Little Master scored his elusive 100th ton after a wait of more than a year although the sheen of his achievement came down slightly as it came against an ordinary Bangladeshi bowling attack. Nevertheless, it was a huge relief for everyone as the 100th century has finally come from his bat! India riding on his big score piled up 289 for 5 after being asked to bat first. India would feel that they were 30-40 runs short because of Tendulkar slowing down as usual towards a century but they will fancy their chances considering that they are only against Bangladesh.

There was an early success for Bangladesh when the in-form Gautam Gambhir (11) dragged a forcing cut shot off Shafiul Islam onto his stumps off an inside edge in the 6th over. A determined Tendulkar feasted on the Bangladeshi attack alongside Virat Kohli to consolidate India towards a supreme position. After putting up a huge stand of 148 runs for the 2nd wicket, Virat Kohli departed dragging a cut shot off Abdur Razzak onto his stumps. Kohli scored an impressive 66 from 82 balls with 5 fours before he got out in the 36th over with India at 173 for 2.

Suresh Raina got a promotion to accelerate the scoring and with Tendulkar slowing down, the left-hander played a crucial knock. Atlast Tendulkar got to his elusive 100th century in the 44th over nudging Shakib Al Hasan off his pads. He took 138 balls to get to the three figures. India lost both Suresh Raina (51 from 38 balls with 5 fours and 2 sixes) and Sachin Tendulkar (114 from 147 balls with 12 fours and a six) in consecutive deliveries in the 47th over. Although India was struggling to get the big fours and sixes towards the end, a final over from Shahadat Hossain yielded 17 runs thanks to Skipper MS Dhoni’s hitting. Dhoni remained unbeaten on a nice cameo of 21 (from 11 balls with 2 fours) to help India reach 289.

Toss and Teams: Bangladesh have won the toss and elected to bowl first in the 4th Match of the Micromax Asia Cup 2012 against India. The hosts have gone in with the same XI that lost to Pakistan by 21 runs in the opening match. India have made one change with R Vinay Kumar rested with a slight niggle and has been replaced with fast bowler Ashok Dinda who is making his comeback for India after sometime.

The pitch may no longer be the batsman’s paradise. It has shown signs of taking turn in the last couple of matches. So Bangladesh should like that because of their heavily loaded spin attack but India are quality players against such bowling.