The way South Africa battered New Zealand in the Tests, no one would have given them a chance of competing in the ODIs against a strong Proteas outfit. They may still go on to lose the series, but New Zealand’s performance in the opening one-dayer at Paarl would be something that they can memorably remember about this otherwise forgettable tour.

The way South Africa battered New Zealand in the Tests, no one would have given them a chance of competing in the ODIs against a strong Proteas outfit. They may still go on to lose the series, but New Zealand’s performance in the opening one-dayer at Paarl would be something that they can memorably remember about this otherwise forgettable tour. This wasn’t a convincing performance either. Chasing a small total put up by a seemingly over-confident South African batting outfit, New Zealand stumbled and crumbed and also lost the battle, before somehow crawling over the line.

The fighting spirit of the Kiwis, which we have come to admire so often over the years, was on display again as the visitors, having to score 209, collapsed to 140 for 8. James Franklin, whose place in the eleven was itself being questioned by some pundits, then came up with a fine display of courage and common sense, as New Zealand edged closer to a much-needed victory. The win, which was aided by mature performances by two other lower-order batsmen, namely Nathan McCullum, Kyle Mills and Mitchell McClenaghan, proved that the Kiwis can never be written off, even if they are battling off-field issues or a revamp in the side. 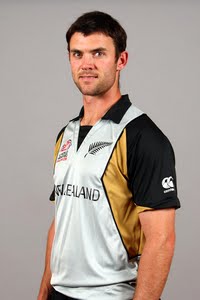 The manner in which Franklin held his nerve under pressure was a tribute to his unwavering spirit, which results in praiseworthy performances like the one on Saturday every time there are question marks raised over his ability. Without doubt, Franklin is a player with limited talent, yet he has managed to make a mark for himself in international cricket, sometimes even outdoing in his own ability. Credit must also go to Mills, whose game usually centres on big hits, for hanging around diligently with Franklin and giving New Zealand a chance of clinching the close encounter, which they eventually did.

Significantly, there were some promising performances for the Kiwis with the ball as well. Prior to his crucial six-ball batting stint, McClenaghan made a sensational debut with the ball, returning with impressive figures of 4 for 20. The important aspect of his bowling performance was that his victims included big names like Graeme Smith and A B de Villiers. In a somewhat shocking misadventure, the Proteas ended up handing four wickets to part-timer Kane Williamson. Not taking away anything from Williamson, it has to be said that South African batsmen should have done much better against him.

As many as five South African batsmen got starts, but apart from Faf du Plessis, none could cross fifty, as a result of which the home side failed to put up a decent score on board. Their bowlers fought back exceedingly well. Ryan McLaren, in particular, was impressive with his line and length. In the end though, they did not have enough runs to defend. The defeat should serve as a wake-up call for the Proteas who, not surprisingly, seemed to be taking it a bit easy. As for the Kiwis, another win and the series would be theirs!