England’s Jonny Bairstow was out in a rather bizarre manner on the third day of the Mumbai Test. He tried to hit left-arm spinner Pragyan Ojha against the spin, but the bat took the leading edge and popped up in Gautam Gambhir’s direction...

England’s Jonny Bairstow was out in a rather bizarre manner on the third day of the Mumbai Test. He tried to hit left-arm spinner Pragyan Ojha against the spin, but the bat took the leading edge and popped up in Gautam Gambhir’s direction, who was fielding at silly point. The ball hit Gambhir’s hands up but popped up, touched his helmet and the settled into the fielder’s hands. At that point, the batsman as well as the fielding side walked off, but later they learnt that, as per the rules, a batsman cannot be dismissed if the ball touches a fielder’s helmet. In the wake of Bairstow’s unusual dismissal, we look at similar instance in the sport in recent times.

New Zealand were chasing 182 to win the clash. Neil Broom was batting on 29 when he was out bowled by Michael Clarke for 29 in the 36th over. However, replays showed that wicket-keeper Brad Haddin’s gloves were in front of the stumps, which isn’t permitted as per the rules. Also, he knocked off the bails with his gloves, in the process, and it wasn’t exactly clear whether the ball had even dislodged the stumps. Although the Kiwis managed to scamper home by two wickets, the controversial dismissal did not go down well with skipper Daniel Vettori, who accused Haddin of not playing in the spirit of the game. It did not help that in the same match Brendon McCullum was also given out lbw when he had clearly hit the ball.

New Zealand were involved again, but this time Sri Lanka were on the receiving end this time. Murali and Kumar Sangakkara were the last pair at the crease for Lanka in the second innings. The duo crossed over for a single that gave Sangakkara a well-deserved Test century. Murali grounded his bat and then went over to congratulate Sangakkara, but the ball was still in play according to the New Zealand keeper Brendon McCullum. He whipped off the bails following the throw sent in by Chris Martin. The Kiwis appealed for the wicket and Murali had to be given out. Even as Stephen Fleming defended his team, Mahela Jayawardene felt that although the dismissal was legal, it wasn’t in the spirit of the game. For the record, Lanka went on to lose the Test by five wickets. 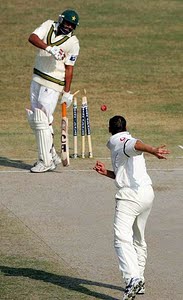 The former Pakistan skipper was unlucky to have been given run out in the game. On day two, Inzamam took evasive action against a Steve Harmison throw that was aimed at the stumps. In the process, Inzamam’s feet were not grounded in the crease when the ball hit the stumps. The third umpire declared him out, but as per the rules it clearly wasn’t out since the laws state that that a batsman cannot be given run out if he is avoiding injury.

Kapil Dev mankaded Peter Kirsten for backing up too far. The India all-rounder had warned the South African batsman a couple of times before as well. However, the third time an enraged Dev pulled out the bails and appealed. The umpire, as per the rules of the game, declared Kirsten run out for 5. A seething Kirsten got into an argument with the Indian fielders, but the umpires had the final say. Even as the Proteas went on to win easily, Kirsten was fined for dissent.