Returning to Sharjah, the venue that saw Rajasthan Royals register two crushing wins to kick off their IPL 2020 campaign on a high, Steve Smith’s men would hope they find their luck back as well. Royals’ campaign has gone completely off the track on bigger stadiums at Dubai and Abu Dhabi, with three consecutive losses.

In complete contrast, Delhi have registered victories in four out of five matches. They have come good in both the batting and bowling department. Their previous match against RCB was the perfect illustration of their overall dominance. After posting an impressive 196 for 4 on the board, they were successful in holding Virat Kohli’s men down to 137 for 9.

RR have struggled in the last three games because their in-form batsmen skipper Steve Smith and Sanju Samson have completely lost their form. In the first two clashes, both Smith and Samson smashed half-centuries, but have been totally different batsmen since. The Royals would hope the duo find their mojo back as the team returns to play at Sharjah. Jos Buttler made a fine half-century in the previous game, but it was a lone hand. 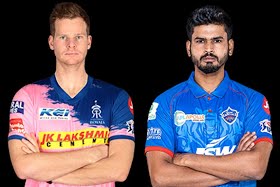 Delhi would look to continue their brilliant run in IPL 2020. At the top of the order, young Prithvi Shaw has been consistency personified, but the experienced Shikhar Dhawan has been wasting too many starts. Skipper Shreyas Iyer has played some impressive knocks while Rishabh Pant has delivered the attacking cameos expected of him. More significantly, Marcus Stoinis has hit a couple of spectacular fifties.

In the bowling, RR would seek better support for Jofra Archer as Ankit Rajpoot and Tom Curran have proved to be very expensive. Delhi have faced no such problems as of now. Kagiso Rabada has been the best bowler with 12 wickets while Anrich Nortje has also stood up for the team. Axar Patel made his presence felt in the previous game with a match-winning performance.

Head-to-Head Record: Rajasthan and Delhi have faced off in 20 games with RR winning 11 and DC 9.

The pitch at Sharjah is a batsman’s paradise. RR chased down a record 224 the last time they played here.

The weather will be in the early to mid-30s. It would get cooler as the night progresses.