England captain Joe Root struck his 22nd Test hundred as England took a 27-run lead over India in the second Test at Lord’s on Saturday. Root remained not out on 180 as England responded with a spirited 391 to India’s first-innings total of 364. After India squandered the advantage with the bat, they couldn’t stop England from going past India’s total as well.

Root’s superb knock came off 321 balls and featured 18 fours as India’s bowlers seemed clueless against him. During the course of his innings, Root also became the second England batter after Alastair Cook to complete 9000 Test runs. Before this, Root scored 64 and 109 in the first Test in Nottingham.

The England skipper featured in a century stand with Jonny Bairstow (57), who compiled a much-needed fifty after his horrors in India. Root and Bairstow took England from 119 for 3 to 229 before an awkward short ball from Mohammed Siraj saw Bairstow miscue one to slip. 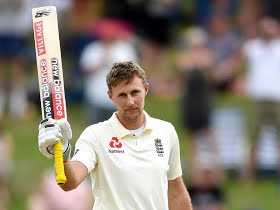 Jos Buttler (23) and Moeen Ali (27) contributed cameos and, at 341 for 5, India looked in danger of conceding a big lead. However, Ishant Sharma (3 for 69), sent back Moeen and Sam Curran off consecutive balls to keep India in the contest. Shepherding the tail, Root took England into the lead.

At the other end, Mohammed Siraj (4 for 94) trapped Ollie Robinson lbw for 6 while Mark Wood sacrificed his wicket for 5 following a mix-up with his captain. With the last man at the crease, Root got aggressive and even played a reverse lap off Siraj. The next ball off the same over was launched over midwicket as England added crucial runs.

Off the last ball of the day, Mohammed Shami (2 for 95), cleaned up James Anderson as India ended the day on a positive note. Jasprit Bumrah had a horror day as he bowled 13 no-balls and finished wicketless.