A West Indies side, confident after crushing victories against England and Sri Lanka, will look for a third prey when they take on South Africa at Nagpur on Friday.

A West Indies side, confident after crushing victories against England and Sri Lanka, will look for a third prey when they take on South Africa at Nagpur on Friday. West Indies will go into the game on a real high, having crushed their earlier two opponents rather mercilessly, with Chris Gayle, Andre Fletcher and Samuel Badree doing the star turns. They will run into the Proteas, who were at the receiving end of a record chase against England, and were unimpressive even in their effort against Afghanistan, allowing the minnows to reach 172 after putting up an imposing score batting first for the second time in the series. 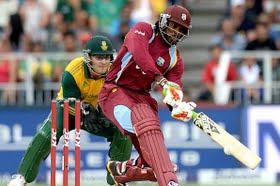 With two wins in two matches, West Indies will remain in contention for a semi-final spot even if they lose to South Africa. But, Darren Sammy's men will want to seal things at Nagpur itself. They would be looking up to a few key players to deliver as always. The swashbuckling Gayle that will find a mention by default. He did not bat in the last game due to a niggle, but it was a blessing in disguise for the Windies as they won without needing a contribution from him. Fletcher stepped in, and eased the team towards victory against a struggling Sri Lankan outfit. What West Indies would love is for both to fire in tandem.

Badree was the other big star for West Indies against Sri Lanka. To finish with figures of 3 for 12 against an Asian side in sub-continent conditions is definitely a praiseworthy effort. A T20 specialist Badree adds a lot of value to the team as he can open the bowling, and keep things tight in the middle overs as well. What should please West Indies most is the fact that they have registered two wins without significant contributions from match-winners like Dwayne Bravo and Andre Russell. And the captain Sammy too hasn't had to do much. At the same time, they would be happy to see Marlon Samuels back among the runs.

Windies' opponents in the game have failed to impress in the tournament, particularly because their bowling has been a big let down. They failed to defend a massive 229 against the Englishmen, and could not contain the Afghanistan batsmen to the extent they would have liked after posting another big score batting first. Dale Steyn is back from injury but he clearly has looked rusty, and it remains to be seen whether the South Africans go back to him, or retain David Wiese. Chris Morris bowled very well against Afghanistan, but more will be expected from Kyle Abbott and Kagiso Rabada. With JP Duminy ruled out of the next game, there will be pressure on Aaron Phangiso to perform.

The big positive that South Africa can take out from the two games so far is definitely their cracking batting. Hashim Amla and Quinton de Kock got quick and significant runs against England while Faf du Plessis and AB de Villiers joined the party against Sri Lanka. David Miller has done the job needed off him at the tail end, playing the quick cameos. Duminy won't be available for the next game, but that shouldn't be a major worry for South Africa as Morris can do a similar job. In the end, it could all boil down to who bats better, and whether the bowers can contain the big hitters in the opposition.