Skipper Alastair Cook said on Wednesday he did not believe England would start as favourites in the one-day series against a depleted India despite their remarkable recent success. 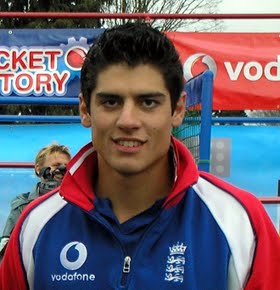 Skipper Alastair Cook said on Wednesday he did not believe England would start as favourites in the one-day series against a depleted India despite their remarkable recent success.

England defeated India 4-0 in the four-match Test series at home this summer before beating them in a one-off Twenty20 game and a five-match one-day series.

"I don't read too much into the favourites tag," Cook told reporters in Hyderabad.

"It is going to be a very different challenge. I don't see any relation between what happened in England and what is going to happen here. India is historically strong at home."

England will play a five-match series, starting in Hyderabad on October 14, before a one-off Twenty20.

India were forced to name an under-strength squad for the first two one-dayers as some of their key players had not recovered from injuries suffered during the England tour.

Seamer Shanthakumaran Sreesanth and off-spinner Harbhajan Singh were not selected.

But Cook, 26, said India still had the bowling resources to put pressure on his team.

"They might be inexperienced, but they are experienced in local conditions which is an important thing. Obviously, it is going to be a tough challenge," said the England captain.

Leg-spinner Rahul Sharma, left-arm seamer Sreenath Aravind and fast bowler Varun Aaron are without international experience. Aaron was part of India's one-day squad in England but did not play a match.

Skipper Mahendra Singh Dhoni, Gautam Gambhir, Virat Kohli and Suresh Raina are the only survivors from the side that defeated Sri Lanka in the World Cup final in Mumbai in April.

Cook said adaptability is the key to success in the series which will see rule changes including the use of two new balls in an innings and a ban on runners.

"The team that adapts quickly to the changes will have an advantage," said Cook, whose side will play two warm-up games in Hyderabad before the first one-dayer.

Jos Buttler and Alex Hales join the squad for the T20 fixture.