Graeme Swann has become the world's No. 1 one-day spinner after his eight wickets helped England to a 3-2 series win against Sri Lanka.

Graeme Swann has become the world's No. 1 one-day spinner after his eight wickets helped England to a 3-2 series win against Sri Lanka. 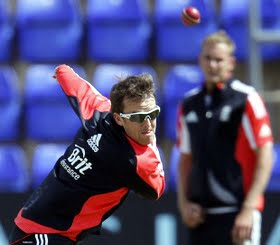 It is the first time he has reached the landmark in his career and he overtakes New Zealand's left-arm spinner Daniel Vettori, who had held the spot since September 2009.

Swann is also ranked No. 2 in Test cricket, behind Dale Steyn, but his No. 1 ranking is the first time an England bowler has achieved that feat in any form of the game since Steve Harmison briefly rose to the top of the Test rankings in August 2004.

Swann's England team-mate James Anderson put behind his disappointing World Cup to claim nine wickets at 21.77 and jumped 17 places to the 11th spot, but Stuart Broad, who only managed two wickets in the series, went in the other direction, falling eight places to 21st.

In the batting ranks Sri Lanka's captain TillakaratneDilshan has dropped six places, after a wretched series that brought 17 runs in five knocks, to sit joint-ninth with Australia captain Michael Clarke, while Kumar Sangakkara rose a spot to No. 4.

Jonathan Trott remains England's highest-ranked batsman at No. 7. Eoin Morgan gained one position to sit joint-23rd place with Ireland's Paul Stirling. Alastair Cook was man of the series after his 298 runs at 74.50, which helped him break into the top 50 for the first time, but at 48th, he still has a long way to climb.