Pakistan-born Australian batsman Usman Khawaja said he was being refused a visa into India for next month's Champions League Twenty20 tournament because of his country of birth. 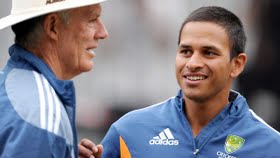 Pakistan-born Australian batsman UsmanKhawaja said he was being refused a visa into India for next month's Champions League Twenty20 tournament because of his country of birth.

"Refusing to let me travel to India as an Australian, because I wasn't born here. Wow," wrote the 24-year-old.

In an exchange with his Portuguese-born New South Wales team-mate MoisesHenriques, Khawaja said it "wasn't that I wasn't born here but where I was, brother".

Cricket Australia (CA) confirmed that Khawaja's visa had been held up by officials at the Indian High Commission (embassy) but said they were confident of resolving the issue before the tournament.

"There has been a stoppage in the system at the Indian High Commission in Australia with Usman's application," CA spokesman Philip Pope told AFP.

"Cricket NSW and Cricket Australia are seeking to understand the detail behind the stoppage with our colleagues at the Indian High Commission."

Pope said the cricketing body had a long-standing relationship with the Indian mission and "we generally find that we resolve our issues mutually, so we'll work through this once we've understood the detail".

"I can't give you a timeline of when it will be resolved, but I'm confident given our history and our relationship that we will resolve this as soon as possible," he said.

Khawaja, the first Muslim to wear the baggy green for Australia and also a qualified pilot, is on the 20-man long list for the NSW Twenty20 side, of which 15 will ultimately be sent.

The promising young left-hander made his Test debut for Australia in the fifth match of the Ashes series in Sydney in January, signing with Derbyshire later that month for the English domestic season.