The Chennai Super Kings were handed their first 10 wicket loss at the hand of their arch rivals Mumbai Indians. Boult (4-18) and Bumrah (2-25) restricted CSK for 114 before Kishan’s blistering 68*(37) took them home with more than seven overs to spare.

With their playoff chances all but over, CSK decided to give their bench warmers a chance, as they fielded Gaikwad, Jagadeesan and Tahir. However, their fortunes dwindled further as they were reduced to 3-4 inside three overs. Boult trapped Gaikwad LBW and got Faf caught behind. Bumrah picked up two in two as he got Rayudu with a short ball and then had Jagadeesan caught at first slip. 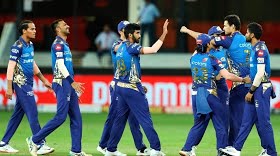 Already under huge pressure, MS and Jadeja tried to counterattack but to no avail as Jadeja was caught by Krunal Pandya off Boult. Dhoni, who hit a humongous six against Rahul Chahar, got greedy and went again the next ball, only to nick it behind to QDK. Deepak Chahar too couldn’t resist the idea of going after the leggie, but lost his wicket to his younger cousin in the process. At 30-6, all seemed over for CSK, but a certain Superman Curran combined with Shardul Thakur to wither the storm. Thakur did his job well of holding one end up, but around the 15 over mark, he too got out while trying to up the ante. Thakur hit a couple of useful boundaries and Curran went berserk against Boult in the final over by hitting three fours as he got to his fifty and also got his team past 100, something which was looking well out of sight at the start.

Chasing 115 for a win was never going to be a problem for MI, and especially after the kind of start they got. Ishan Kishan was promoted to open alongside de Kock by Pollard as regular skipper Rohit Sharma was sitting out of this match. Both of the left handed batsmen were looking fluent from the word go but it was Kishan in particular who was looking to blast the CSK bowlers. He was severe against Hazlewood and Chahar as he slashed hard at everything that was thrown at him. At the end of powerplay, Kishan was at 36(22) with MI reaching 52-0.

De Kock then started to express himself as he took a particular liking to Thakur by smashing him for two fours and two sixes. Kishan slammed Jadeja and Tahir for sixes after getting to his fifty as the target was getting near. With just three required, de Kock stroked a four against Thakur in the 13th over to lead his team to an emphatic win.