HRV Cup 2010/11 Schedule and Fixtures, Results and Scores, New Zealand Domestic Twenty20 cricket will going to start from December 2, 2010 with the match between Northern Dis v Central Dist at Hamilton.

HRV Cup 2010/11, New Zealand Domestic Twenty20 cricket will going to start from December 2, 2010 with the match between Northern Dis v Central Dist at Hamilton. HRV T20 Cup has six teams. There will be several big names from around the world in the HRV Cup this summer, after Northern Districts signed Herschelle Gibbs, Brad Hodge and David Warner. There were also reports that Canterburywere chasing the Australian fast bowler Shaun Tait, although he will now be out of action until at least early December with an elbow injury. 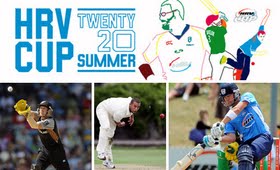 This time HRV Cup has become more popular after signing more international players for this season. All the teams will be looking for a win to get a chance to play in Champions League 2011. Each team will play 10 matches and the top two teams will qualify for the finals which will take place on Jan 2, 2010 and still Venue needs to be decided. New Zealand domestic sides are allowed to field only two overseas players in their Twenty20 domestic competition, but there is no limit on how many can be on the team’s roster.

All Matches Results, Schedule and Fixtures: