It is a big blow: Ajinkya Rahane on KL Rahul being ruled out of Test series due to injury

Team India’s stand-in captain for the first Test, Ajinkya Rahane has admitted that KL Rahul being ruled out of the Test series against New Zealand due to injury has been a big blow. He, however, expressed confidence the youngsters in the team will rise to the occasion. Apart from Rahul, Virat Kohli has been rested for the first Test while Rohit Sharma and Rishabh Pant will miss both the Tests.

Speaking at a pre-match press conference, Rahane admitted that India will miss Rahul since he is a very experienced campaigner and has been in great form as well. The stand-in skipper said, “See, it is a big blow when we got to know that KL (Rahul) is injured and is not available for these two Test matches. He did really well in England. He was in good form and played really well in T20s. Obviously, we will miss him but we have guys who can fill that slot, guys who did well for us in the past with that experience. Not too worried about the opening slot.”

On the absence of Kohli, Sharma and Pant, Rahane added that the team will back the youngsters to do the job. He admitted, “We will miss all these three guys (Kohli, Sharma and Pant),” and added, :But it is a good opportunity for all the youngsters to play. Whoever is getting an opportunity to bat, they will look to back themselves and play with freedom. Rahul bhai (Dravid, head coach) is backing each and every individual. This team is all about backing everyone and one another.” 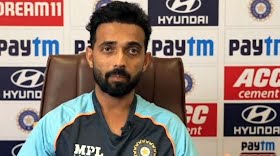 Rahane also confirmed that Shreyas Iyer will be making his Test debut in the first Test against New Zealand with Rahul being ruled out of the series due to a muscle strain on left thigh. Rahane was quoted as saying, “Shreyas is going to make his debut. Unfortunately, KL is injured and will not be a part of the Test matches. So, Shreyas will make his debut tomorrow.”

The pitch is often a subject of debate in Indian conditions. Asked about the playing XI, Rahane said that they are not so sure about it since they don’t know exactly how the wicket will play. The 33-year-old conceded, “We are not too sure about the combination. But in India you generally get spin-friendly wickets, the ball generally keeps slightly low and slow. We expect that but not too sure how the wicket will play. We will have to wait till tomorrow and then assess from there.”