No total big enough if you field like that, admits Virat Kohli after a loss in 2nd T20I

India captain Virat Kohli, in no uncertain terms, stated that his team was not going to win matches if they fielded the way they did in the second T20I against West Indies at

India captain Virat Kohli, in no uncertain terms, stated that his team was not going to win matches if they fielded the way they did in the second T20I against West Indies at Thiruvananthapuram. India dropped three catches in the field, and West Indies benefitted immensely to level the series 1-1. Windies won the match by eight wickets with nine balls to spare.

On Sunday, two catches went down in the fifth over bowled by Bhuvneshwar Kumar, as both the openers Lendl Simmons and Evin Lewis got one reprieve each. Washington Sundar dropped a simple chance at mid-off when Simmons was on 6. Two balls later, Rishabh Pant, diving to his left, failed to latch on to a chance from Lewis, who was then on 16.

The missed opportunities proved costly for India as Simmons went on to score an unbeaten 67 from 45 while Lewis scored 40 for the second game in a row. Then, in the 17th over, Shreyas Iyer dropped Nicholas Pooran on 18, and West Indies eased towards the target. Speaking after the game, Kohli opined fielding was the major factor in India’s loss 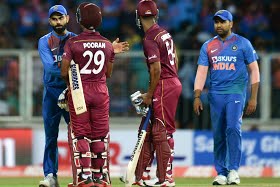 "We had to get those 15 extra runs to defend, but look, if you field like that, then no total is big enough. Last two games we have been below par in the field. We were good with the ball, in the first four overs we created enough pressure, and then you drop two chances in a T20 game in one over, that's going to cost you,” the Indian captain said at the post-match presentation.

“If they lose two wickets in one over, the pressure's on them. I think it's a game of margins and we need to understand where we went wrong. It's pretty evident. It's there for everyone to see and for us to improve on. I think fielding is something we need to be braver about, and not worry about dropping catches,” Kohli felt. India dropped five catches in the first T20I as well but won due to Kohli’s and KL Rahul’s sublime fifties.

While the rest struggled, the captain led from the front, pulling off a brilliant running catch at long-on to dismiss Shimron Hetmyer. "It was one of those catches that just stuck in the hand. It came out of the lights a little bit, but I just committed to the ball and put both hands out, and luckily it came into my hand. Last game I put one hand out and I dropped it. It's about putting in the effort when you can and sometimes they stick and sometimes they don't," Kohli explained about his brilliant fielding skills.

Earlier, India experiments with the batting order and sent it in rookie Shivam Dube at number three. The move was a success as the all-rounder notched up his maiden fifty. On the rationale behind the decision, Kohli said, "Well we knew the pitch is going to offer something to the spinners. They were going to start with a spinner, so we thought why not Shivam goes up and tries and attacks the spinner. Because the batting line-up that we have will probably go unused if two guys at the top fire. That was the plan behind it, worked pretty well.”

India were 144 for 4 after 16 overs, but the final flourish was missing as they were held to 170. It proved to be significant in the end. “To be honest, West Indies assessed the pitch really nicely and they bowled enough cutters and changes of pace to not let us get any momentum,” conceded Kohli.