Veteran New Zealand wicketkeeper-batsman BJ Watling has announced that he will retire from all forms of the game after Kiwis’ tour of England next month. New Zealand will play two Tests against England, which will be followed by the World Test Championship (WTC) final to be held from June 18 to 22 in Southampton.

Watling (35) has represented New Zealand in 73 Tests so far and has scored 3773 runs at an average of 38.11 with eight hundreds and 19 fifties. His best score of 205 was registered against England at Mount Maunganui in November 2019. Watling also played 28 ODIs and five T20Is for the Kiwis. He is New Zealand’s most successful Test keeper with 257 dismissals - 249 catches and eight stumpings. He has also taken 10 catches as a fielder.

Speaking about his retirement, Watling said, “It’s the right time. It’s been a huge honour to represent New Zealand and in particular wear the test baggy. Test cricket really is the pinnacle of the game, and I’ve loved every minute of being out there in the whites with the boys. 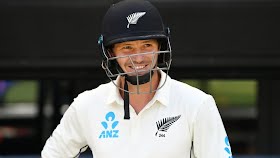 “Sitting in the changing rooms having a beer with the team after five days’ toil is what I’ll miss the most. I’ve played with some great players and made many good mates. I’ve also had plenty of help along the way, for which I’ll always be grateful,” Watling further added.

Watling though made it clear that he will be focused and will give his best in the last three matches of his career. “Although I’ve had to make this announcement ahead of the tour to England, my focus is very much on the three tests ahead and preparing to perform in them. This tour will be a challenge on a few levels and we know as a team we will need to be at the very top of our game if we want to succeed,” he asserted