Delhi Daredevils managed to pull off a nervous 3-wicket win in the final over against Perth Scorchers to keep their hopes alive of reaching the Semi Finals.

Delhi Daredevils managed to pull off a nervous 3-wicket win in the final over against Perth Scorchers to keep their hopes alive of reaching the Semi Finals. The Daredevils now have two wins and a no result in the 3 matches they have played so far.

Needing just 122 to win, Daredevils were cautious in the run chase with Virender Sehwag playing a careful knock of 52 (from 44 balls with 4 fours and a six). At the other end though wickets were 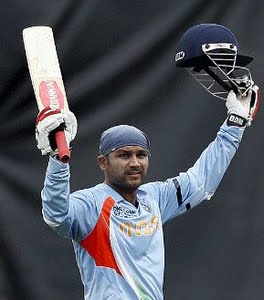 going down at regular intervals to keep the Scorchers interested. After Sehwag’d exit at 96 for 6 in 15.4 overs, the match was in the balance and eventually left Daredevils with 8 runs to score off the final over. The pair of Ajit Agarkar and Pawan Negi kept their cool to see Delhi through with three balls to spare.

Perth Scorchers restricted to 121: Delhi Daredevils restricted Perth Scorchers to a modest total of 121 for 5 at Newlands in Cape Town after winning the toss and electing to bowl first under overcast conditions. The bowling attack of the Daredevils was very strong with four pacers and the Perth Scorchers found it difficult right through their innings to break free. Morne Morkel was the pick of the bowlers taking 3 for 19 in 4 overs. India discard Ajit Agarkar was impressive as well for his 2 for 14 in 4 overs.