The selection of Rohit Sharma over Ajinkya Rahane for the opening Test at Cape Town came in for strong criticism, but former India skipper Sourav Ganguly has backed Virat

The selection of Rohit Sharma over Ajinkya Rahane for the opening Test at Cape Town came in for strong criticism, but former India skipper Sourav Ganguly has backed Virat Kohli's bold decisions.

“Virat Kohli should not worry about such things. Although KL Rahul and Ajinkya Rahane have a good history of scoring runs away from the sub-continent and have better records as batsmen, India can’t just chop-and-change in every game. They have shown faith in the current batting and that should continue in the next Test as well. They still have two more Tests to play and I feel all the matches will produce results,” Ganguly wrote in a column for Times of India. 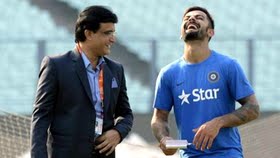 Praising the Indian seamers for their performance in Cape Town, he added, “There has been a lot of talk about the combination. India did the right thing by going in with five bowlers. As much as scoring runs is important in a bid to win Test matches, getting wickets is also key. The reason why we were thinking of an Indian win at some point is because the bowlers got 20 wickets and that will continue to be an important criteria over the next two Tests.”

Ganguly was all praise for allrounder Hardik Pandya, who scored 93 runs in the first innings. “Hardik Pandya came good with the bat and India should persist with him. The problem lies with the overall batting performance, and this has to be fixed soon. There will be lot of talk about players who were not in the playing eleven. That’s always the case when you lose,” Ganguly further wrote.