I always play every game as my last game: Kedar Jadhav

One innings and Kedar Jadhav, at 31, is the new shining star of Indian cricket. And, why not

One innings and Kedar Jadhav, at 31, is the new shining star of Indian cricket. And, why not! A player who can outscore Virat Kohli in strokeplay and run-making must have some special talent. After all, even the skipper himself admired Jadhav’s brilliance on Sunday at Pune.

Some of the shots Jadhav played were incredible especially against the spinners. A short ball fired into his pads was driven over mid-off against Moeen Ali. Also, there was a sweep against the turn played of Adil Rashid, which headed over mid-on for a six. With the euphoria of the innings still strong, Jadhav elaborated the reasons for being able to play shots like that. 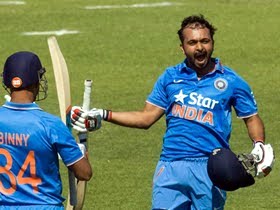 "As a kid, I played more tennis-ball cricket than with the cricket ball. There used to be a tournament where you could hit fours and sixes only straight down the ground. If you hit on the sides you were given out. So that's how I got into this habit that even if there is bounce, if the ball is at a manageable height and if I feel I can clear 30 yards, I can do it. I could do this with the tennis ball. So the flow with which I was playing yesterday, I thought if there isn't much bounce and if I can get a bit of elevation, I can hit out. In that over we hadn't got a boundary and you needed a boundary every over to maintain that asking rate. So I took that option and it clicked," Jadhav was quoted as saying by espncricinfo.

Jadhav’s hundred was his second in ODIs, and one that should ensure a decent run for him in the one-day team. But, he isn’t taking his place for granted for sure. "There shouldn't be a change in my approach. I always play every game as my last game. Whenever you represent your country, you've to give more than 100%. I'll try and do that in whatever games I get, whenever I bat or bowl."

Explaining how he pulled off the attacking brilliance against England on Sunday, Jadhav said, “Since we were four down, England were looking to attack. It was good that many fielders were in catching positions rather than saving boundaries. The wicket was good for batting, so I had a lot of gaps to score boundaries. And my natural game is to try and dominate the opposition whenever I bat. I look to take the bowlers on. So I was just playing in that flow, and because we had to chase 350, irrespective of the situation, we had to maintain the tempo."

The down to earth Jadhav was all praise for his skipper, who he said, helped him a lot, although he was pushed to the limits when it came to running between the wickets. "Whenever you bat with Virat, it helps you. Because the bowlers' focus would be on him - how to get him out, how to control him. So that's an advantage. If you are batting with him, you sometimes get loose balls and more opportunities to score. The bowlers are not able to put a lot of pressure on you, so that helps a lot,” the batsman concluded.