A couple of brilliant performances from Stuart Broad with the bat and Monty Panesar with the ball has left England in the Driver’s Seat in the Second Jazz Cup Test Match at the Sheikh Zayed Stadium in Abu Dhabi. By the close of play on Day 3, Pakistan have recovered from a hopeless position of 54 for 4 to finish at a much better looking 125 for 4. However with a lead of just 55 runs with a fragile lower order to come, Pakistan have a lot to do if they have to keep pressure on the English batsmen in the fourth innings.

The third day’s play started with England at 207 for 5 in reply to Pakistan’s first innings score of 257. The two overnight batsmen – Matt Prior (3) and Ian Bell (29) fell reasonably early to leave England struggling at 268 for 7. Both the batsmen were out lbw. First it was Matt Prior getting pinned back into the crease by Saeed Ajmal to trap him lbw and Umar Gul followed it up 10 overs later by getting one to nip back and strike Ian Bell’s backpad infront of middle.

England weren’t getting the big partnerships but each of the lower order pair was adding precious runs to build the lead. Stuart Broad counter attacked the Pakistanis to smash an unbeaten 58 from 62 balls with 6 fours and a six before his team lost the remaining three wickets. The eight wicket to go for England was in the form of Graeme Swann (15) who was lbw to an arm ball from Abdur Rehman, Mohammad Hafeez with a couple of quicker arm balls wrapped up the innings with James Anderson getting his off stump cleaned up on the backfoot and last man Monty Panesar struck on the pad infront of middle. England bowled out for 327 in 112 overs having taken a handy first innings lead of 70 runs. The spinners did most of the damage for Pakistan with Saeed Ajmal taking four wickets, Mohammad Hafeez taking three and Abdur Rehman taking a couple of wickets. 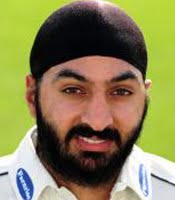 Pakistan who got to bat a little while after lunch were struggling at 54 for 3 in 27 overs by the end of the afternoon session. They lost the wicket of Mohammad Hafeez (22) in the 12th over to a nice arm ball that had the right hander lbw. In the very next over, Graeme Swann complemented Panesar by striking the timber of left-hander Taufeeq Umar with a drifter that skidded through his gate. Swann struck in his first over itself.

In the 18th over, Monty Panesar produced a beauty to strike the off stump of the experienced Younis Khan (1). It was a flat delivery that pitched around middle and went past the forward defence with sharp turn to strike the off stump. A few overs later, Skipper Misbah-ul-haq was sent back to the pavilion when he was struck on the pad just in line of the off stump by an arm ball with the bat so close to the pad. The bowler was once again Monty Panesar who puzzled the Pakistani batsmen with a mixture of orthodox left arm turners with skidding arm balls.

By Stumps, Pakistan got a spirited partnership going between no.3 Azhar Ali (46* from 140 balls with 7 fours) and Asad Shafiq (35* from 105 balls with 3 fours). The two youngsters have put up 71 runs for the unbroken 5th wicket stand. England missed out on a late breakthrough in the final session when Kevin Pietersen failed to hit the stumps with his underarm throw at the batting end which could have ended Asad Shafiq’s stay.

By the close of play, England are certainly in a great position to go onto win the Test and level the series thanks to superb bowling from Monty Panesar, who has figures of 25-13-44-3.