Having lost their last matches, both Punjab and Hyderabad will look to return to winning ways when they take on each other at Mohali. While Punjab

Having lost their last matches, both Punjab and Hyderabad will look to return to winning ways when they take on each other at Mohali. While Punjab failed to stand up to Chennai challenge, Hyderabad was stunned by Mumbai to courtesy Alzarri Joseph.

Chasing a below-par score, Hyderabad came completely unstuck against Jospeh. His six wickets made a strong Hyderabad batting outfit look weak. It also proved that they cannot depend on only David Warner and Jonny Bairstow for big runs. They will need contributions from the other batsmen as well. 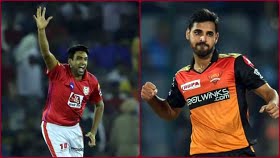 R Ashwin and his side would look to exploit the weakness found in Hyderabad's batting. Punjab themselves have not been consistent in either the batting or bowling. Chris Gayle and Mayank Agarwal began well but lately apart from KL Rahul and Sarfaraz Khan the rest have not done that well.

The bowling too has been a mixed bag. Sam Curran and Mohammed Shami were excellent against Delhi but failed to repeat their heroics against Chennai. Punjab would want the consistency to come back in all departments of the game.

Although Hyderabad bowling was steady against Mumbai, they would rue their bowling not being able to finish things off as Kieron Pollard's knock made a big difference in the end.